We continue the diary of Theodore and Nellie, son Gene and daughter Eva. Gene is married and lives close by in another house.  The family information is in the January post. I will link it here. There is a short post above the diary for January. 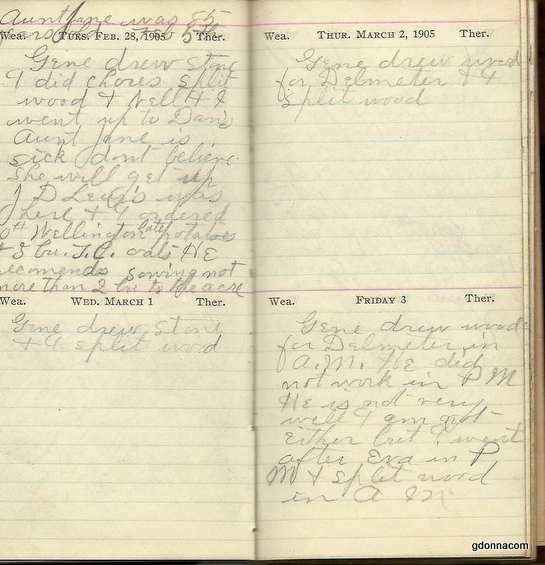 Theodore is writing this diary

February 28th Aunt Jane was 85 years old Feb 5th. Gene drew stone today. I did chores, split wood and Nell and I went up to Dan's.  Aunt Jane is sick, don't believe she will get up. J D Lewis was here and I ordered 10# Wellington late potatoes and 5 bushels T.C. oats H E recommends sowing not a mere than 2 bushels to the acre.

Gene drew wood for Delmeter and I split wood.

March 3, Gene drew wood for Delmeter in a.m. He did not work in P.M.  He is not very well I am not either but I went after Eva in P.M and split wood in a.m. 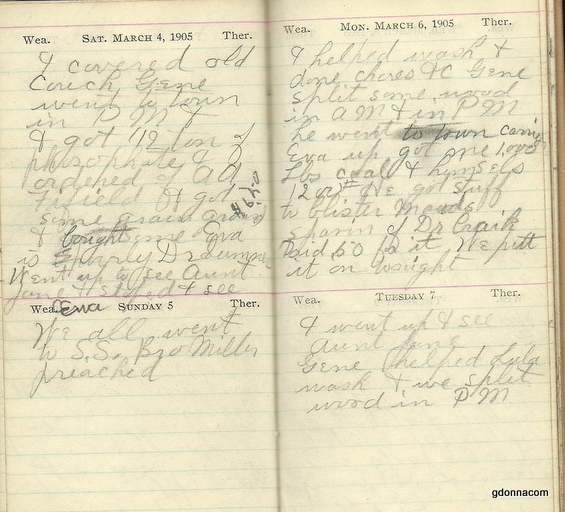 I covered old couch. Gene went to town in P.M. and I got 1/2 ton phosphate and ordered ?? Fifield. I got some grain ground and bought some.  Eva is (Staying) Dr. Sumner. Went up to see Aunt Jane and stopped in to see Eva.

We all went to S.S. Bro Miller preached.

( I did some research and found an article from 1897 and learned a spavin is a condition a horse can get on a bone or bog. This blister is an old remedy they put on the horse to help or cure this condition.)

I went up to see Aunt June. Gene helped Lula wash and we split wood in P.M. 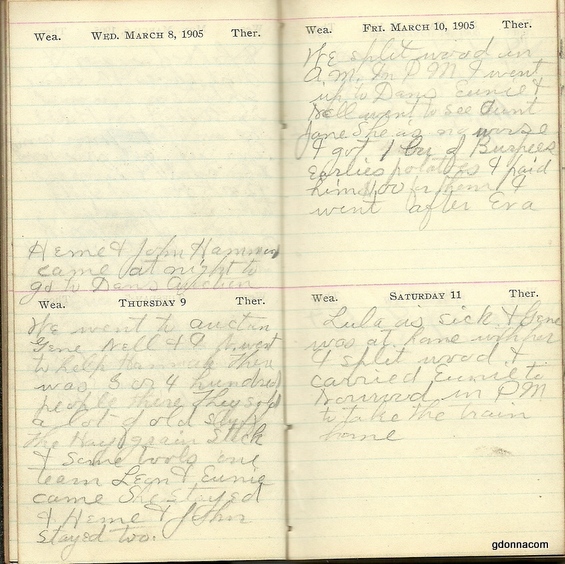 We went to auction. Gene, Nell and I went to help Hannah, There was 5 or 4 hundred people there. They sold a lot of old stuff. The hay grain stick and some tools. one team. Leon and Eunie came and she stayed and Heme and John stayed too.

We split wood in a.m. and p.m. I went up to Dan's. Eunie and Nell went to see Aunt Jane. She is no worse.  I got 1 Bu of Burpees Earlies potatoes and paid him #1.00 for them I went after Eva.

Lula is sick and Gene was at home with her. I split wood and carried Eunice to Norwood in P.M. to take the train home. 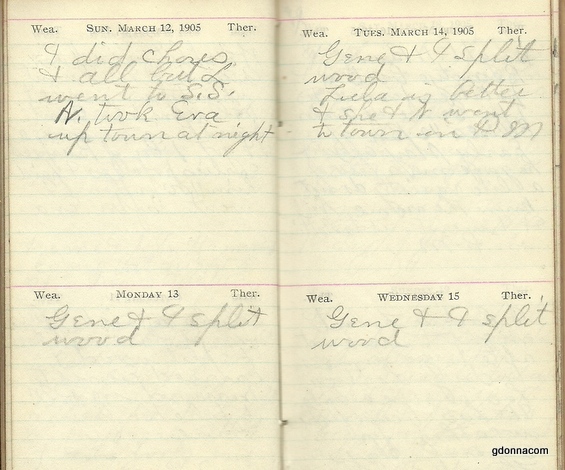 Gene and I split wood.

March 14 Gene and I split wood. Lula is Better and she and N (Nellie) went to town in P.M.

Gene and I split wood. 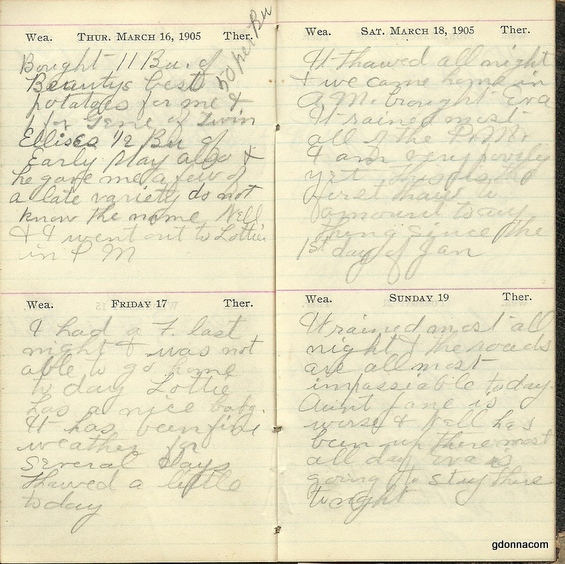 Bought 11 Bushels of Beauty's best, 50 per bushel, potatoes for me and 1 for Gene of Twin Ellises 1/2 bushel of Early play also and he gave me a few of a late variety. do not know the name. Nell and I went out to Lottie's in P.M.

March 17 I had a Fever last night and was not able to go home today. Lottie has a nice baby. It has been fine weather for several days. Thawed a little today.

It thawed all night and we came home in a.m. brought Eva. It rained most all of the P.M. I am very poorly yet. This is the first thaw to amount to anything since the first day of January.

It rained most all night and the roads are almost impassible today. Aunt Jane is worse and Nell has been up there most all day. Eva is going to stay there tonight. 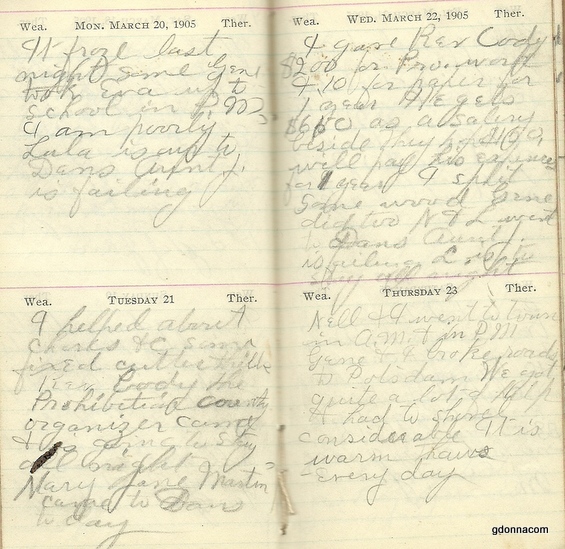 It froze last night some. Gene to Eva up to school in P.M. I am poorly. Lula is up to Dans. Aunt Jane is failing.

I helped about chores and some. Fixed cutter tiller. Rev Cody, Prohibition county organizer came and is going to stay all night. Mary Jane Martin came to Dan's today.

Nell and I went to town in a.m. and in P.M. Gene and I broke roads to Potsdam. We got quite a lot of help and had to shovel considerable. It is warm thaws every day. 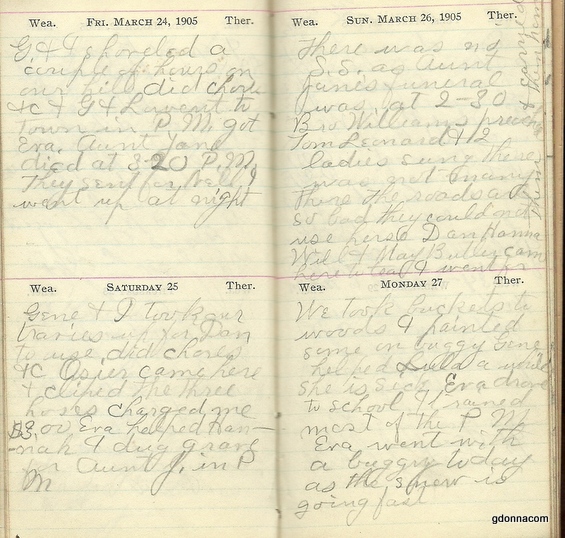 Gene and I shoveled a ample of hours on our hill. did chores and C and G and Lavent to town in P.M. got Eva. Aunt Jane died at 3:20 P.M. They sent for Nell and went up at night.

Gene and I took our traries up for Dan to use. did chores and C Osier came here and cliped the three horses. Charged me $3.00. Eva helped Hannah and dug grave for Aunt Jane in P.M.

There was no S.S. as Aunt Jane's funeral was at 2:30. Bro Williams preaching. Tom Leonard and 2 ladies sung. There was not many there. The roads are so bad they could not use herse. Dan Hanna, Will and May Butler came here to tea I went for them and carried them home.

We took buckets to woods and painted some on buggy. Gene helped Bula awhile. She is sick. Eva drove to school. It rained most of the P.M. Eva went with a buggy today as the snow is going fast. 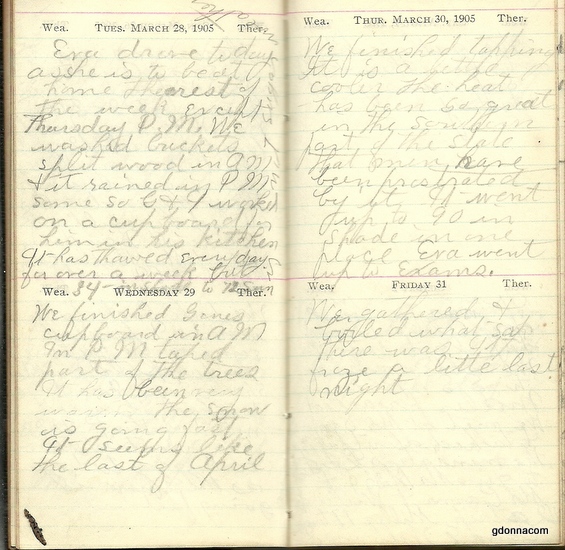 Eva drove today as she is to be at home the rest of the week except Thursday P.M. We washed buckets, split wood in a.m. and it rained in P.M. some so Gene and I worked on a cupboards for him in his kitchen. It has thawed every day for over a week but is not sugar weather. ( He is talking about sap time) 34 in shade to 72 in sun.

We finished Genes cupboard in a.m. in P.M. tapped part of the trees. It has been very warm. The snow is going fast and seems like the last of April.

We finished tapping. It is a little cooler. The heat has been so great in the southern part of the state. That men have been frustrated by it. It went up to 90 in shade in one place. Eva went up to Exams.

We gathered and boiled what sap there was a freeze a little last night.

I will continue this diary the first of April. If you are using a computer I have a small area that says Donna's diary posts and you can click on that to see all the diaries that have been posted so far if you need to catch up.

Our Seasons at Home