Our Fur Babies Then and Now 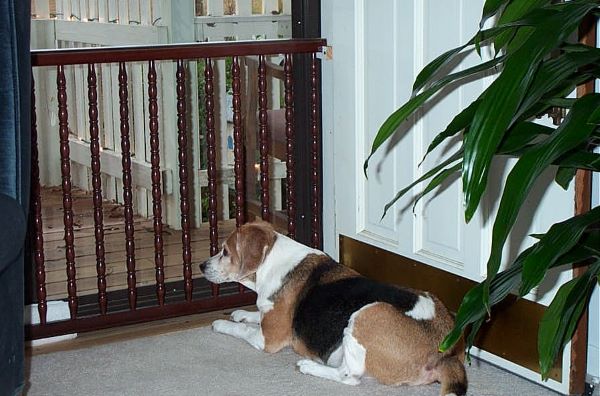 A photo of Margaret aka Maggie.

I thought it was a good time to do an update on our four legged family members and a good time for me because I need to do a  post like this at this time.  In our entire state of Alabama, there are no ICU Beds left in any hospital in our state.  Our Grocery store down the street has closed due to staffing problems and the tropical storm just passed through us night before last.  I am thankful that we did not get any damage, we Just need to clean the yard and help a family member to cut up a tree that fell on her porch.

This is early for us to have tropical storms or hurricanes here, we normally get more ramped up around mid, late September through November.  Thank you all for your prayers.

Our computer that has many of our pet photos will not load and I have tried to get them out of that computer but cannot so I am going to go with what I have.  Bernadette the black Pekingese, our youngest, Elizabeth the cocker/ Dashchund mix (Docker) is our middle and Katherine (Daschund) is our oldest.

Sometimes when times are a bit rough we have to focus on things that make us happy and our babies make us happy.  Even those that are gone now, we know we gave them love and we cherish our memories of them. 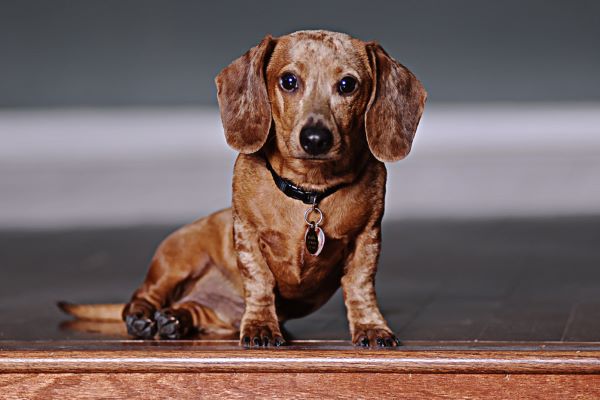 And then there is Frank... Frank is Katherine's brother that lives at our son and daughter in law's house. Frank and Katherine get to visit each other so they have remained in each others lives to this day. 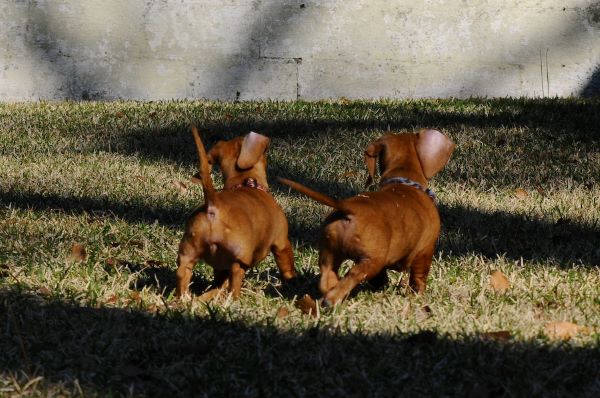 When our son went to get his puppy that he named Frank, he went back and got Katherine for us.  None of us could stand the thought of leaving her behind. She was not as strong as Frank and required medications to help her get past her illnesses.

The girls do not like the camera but will look upward if you say the word eat. :) or beg them....

All of our babies came from situations that they needed to be rescued or re-homed.  Even our Lovebird and Cockatiel were from a man that rescued wildlife and someone had dropped them off as babies because of deformities.

The pet section of this blog have stories and pictures but I have not updated in a long time.

This is Frank on the right and Katherine on the left when they were tweens. He came for a visit about two weeks ago.

Katherine before she turned grey. 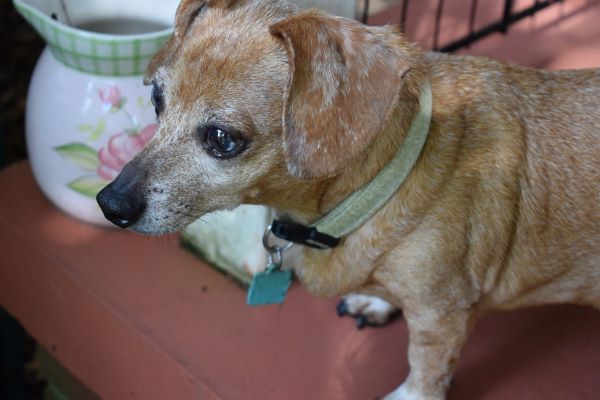 Baby Elizabeth. It was a strange situation how we got Elizabeth.  I rode with Charles for him to work an account and was sitting in the car in a parking lot waiting for Charles to come back out.  This woman drove up and parked in front of me and looked very frazzled.  She was scribbling to make a sign.

I could see a child in the back seat sleeping.  The sign said puppy. So I asked her what was going on.  She said her children were going to kill this puppy.  Her daughter kept squeezing her by the neck and dropping her on her head.  She said she did not know it was going to be this hard to have a puppy.  She was worried about the puppy because she had been handled so badly.

I told her I would take the puppy, she was relieved.  I know Charles well enough that he would not care at all.  So I covered her up in my lap and she went to sleep.  When Charles got in the car I did not say anything, for a very long time.

We drove several miles down the highway and I saw a church ahead and asked him to pull over in the parking lot, that I wanted to show something to him.

I wish you could have been in the car to see his face. I told him the story and he was like me, take the puppy! 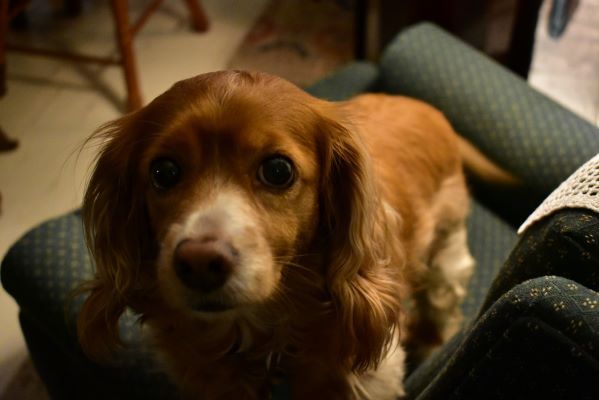 Elizabeth Now... From that day we got her, we knew she was sensitive and afraid.  She shook her head a lot, most likely from being dropped so much.  Her hearing is sensitive and she is afraid of flies, rain bubbles and any sudden movements. 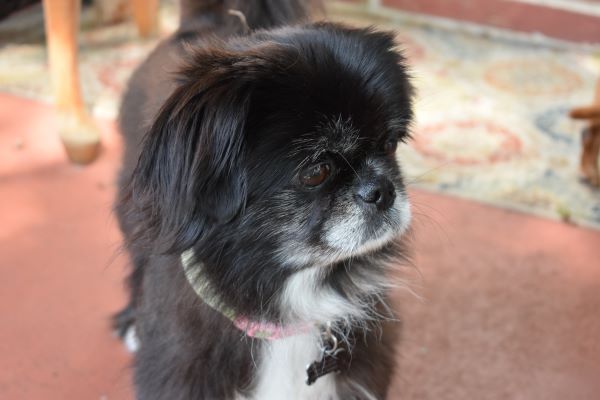 This above is Bernadette, she is the youngest of our three fur babies.  Bernadette was severely abused when she was a puppy.

One day we got a phone call from a lady that asked if we could take a puppy that needed medical attention.  So we did and found out that she had been struck by a truck when she was only weeks old, someone had tied rubber bands tightly around the base of both of here ears and her back feet and left them there until they embedded into her skin and caused her to lose feeling in her back left foot. Her ears and feet were so swollen and the vet found the rubber bands and had to cut them out.

Her skin was in terrible condition and she required constant attention and medical care.  She was also mentally stressed and afraid of different sounds to the point that she did everything she could to run away, to hide, to escape from a sound that reminded her of somewhere she had been that caused her pain.

Her story is under pets on this blog and her graduation from obedience school. 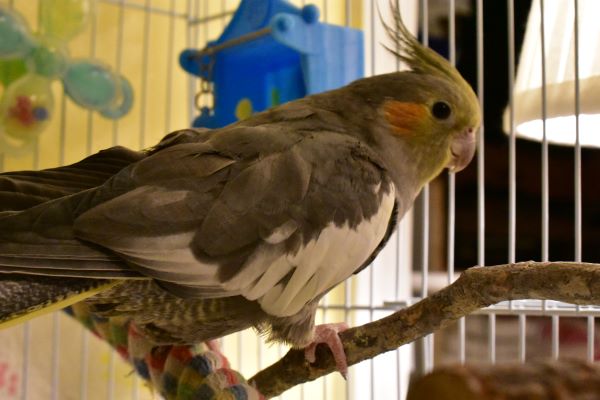 Belle and Bootsy were dropped off at a wildlife rescue but they did not keep these kinds of birds.  Bootsy a lovebird with two clubbed feet and Belle with a missing toe.  So one day when we dropped off a injured squirrel, this nice older man talked us into taking home these two birds that needed to be hand fed and cared for. He said they are not wildlife and he could not keep them because the animals he takes go back into the wild.  So he offered us a trade, a very badly injured squirrel for two baby birds that were in need of much care.  So we brought them home.

Margaret is in heaven after a very long life on this earth and she had a wonderful life. Even though we miss her, we have very happy memories.

Also our little Sally, she lived to be a very old girl but always looked like a puppy.  Her last several years, she was blind and deaf but would still play with her toys and had the best energy.   She was the happiest girl in the world, always bouncing around.

Carley, Sugar and Cookie were our bunnies that came from our local city animal rescue and we gave them the best homes we could manage and a large place to run and jump and play.

Carley passed away from cancer. The vet said nothing we could do.

Sugar and Cookie had been abandoned in a garage of a house that people had move out of.  The humane society told us there conditions had been bad.

I will never forget the day that we put a bowl of water in their cage.  They had only drank from a lick bottle and had been left behind in a cage in someone's garage after they moved away.  After we got them home we worked on a place for them. The first day that they first drank from a large bowl of water I stood there and cried and thought they would never quit drinking.

I want to put out the message that many animals need more than a lick waterer and yes the bowl may be more difficult to keep clean or keep from being knocked over but they need a bigger source of water, at least our experience is that rabbits do.  We had to anchor their bowl but it was necessary.

They would build large hay tunnels in their 12 foot run and have the best time.  I would take a bale of hay and put it in their run and fix it up for them as I thought it should be and then they would run over and push it around to how they wanted it.  I would put their play tubs and toys to where I thought it should be and again they would show me where they wanted it to be.  I loved how they decorated their home and made the most interesting tunnels.

Sugar and Cookie lived longer than the estimated life of a rabbit. 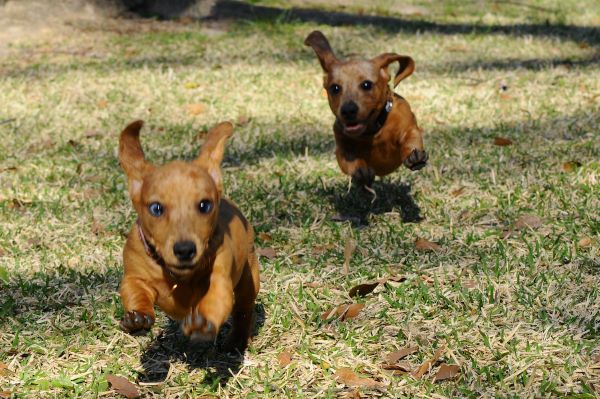 Frank and Katherine do not have the high energy they once had but they still visit one another and Bernadette will insist that Frank plays with her.

A lot of people do not want to open their hearts to animals because of the pain when they are gone.  But our shelters are so full and they need us to help. There are so many needs that we can do something about.  We do not even have to bring a animal home, we can volunteer, we can sew winter pads for the cold floors or we can donate.

It does not have to be animals, we also can help another person in some small way.

It may be just taking care of the plot we live on in a natural way so that the wildlife that come to visit us is safe for them.  Love and Care, that is what it is all about.

I hope you enjoy this video I have made.

Would you like to make a comment or view comments on this article?
Visit the comments section in the new discussion forum!

No comments so far.

NEW! Join the mailing list to get email notifications when new articles are posted to our site.

Thank you for joining!

IMPORTANT!
You were sent an email to confirm your subscription to our mailing list.
Please click the link in that email to confirm or you won't be added.
If you have not received the email within a few minutes please check your spam folder.