Understanding the Point System and around the house. 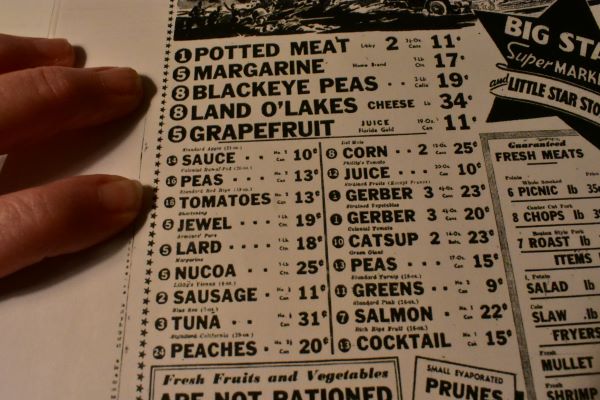 Now we are getting closer to our big changes in our history study.  It is time to register for our war book number 2.  There is now a ban for buying canned food so the grocery stores can take inventory and no one can purchase canned Meat, Fish Vegetables and Fruit until March 1 and then after that,only with money and war ration stamps.

It is time to learn how the point system works.  Above is a photo of what we will see in the grocery ads.  The number before the food item is how many points it will take to purchase that item.  We see Tuna, 3 points, peaches 24 points.  Cheese 8 points, Margarine 5 points etc.   When people go to the grocery store, they must have the stamps or they will not be allowed to purchase rationed items.  Also there are shortages as well so we have to be ready to substitute.  These are only a few of the items.  There is a very long list of rationed items. 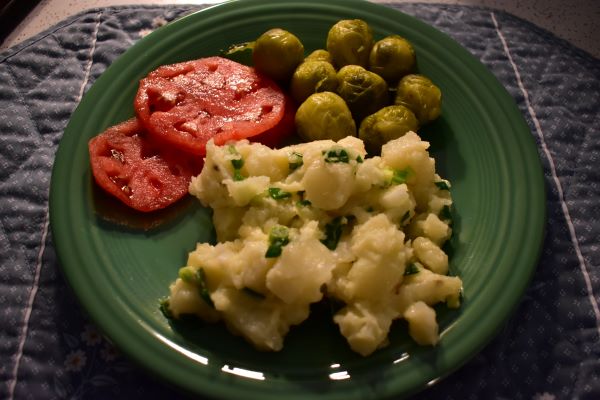 Today Charles and I had a non rationed meal.  I made boiled potatoes with spring onion I pulled from the victory garden, brussels sprouts and sliced tomatoes from the grocery store.  I did add a little grated Cheese and butter that we already had to the potatoes.

Victory gardens are urged as 95 percent of the U.S. Food under Rationing.

We can do this!  We have to so we can help our country, I am saying this to those that are doing the study or reading along.

If you have not already, here is the link below how to make Ration book two.  Once you have your book made it will all make sense how these stamps will be used when we go shopping.  During 1943 people had to declare their canned food items they had at home and stamps were deducted.  The way we do this study is our pantry is considered our store as well as the real grocery store.  When we pull something from the pantry we cross off the stamp points that are needed to pull that canned item.  Same for meat that we use out of our freezer.  If we do not have enough points then we cannot use it.  They could not in the past during ww2 so we are serious about our study so we do what they had to do. 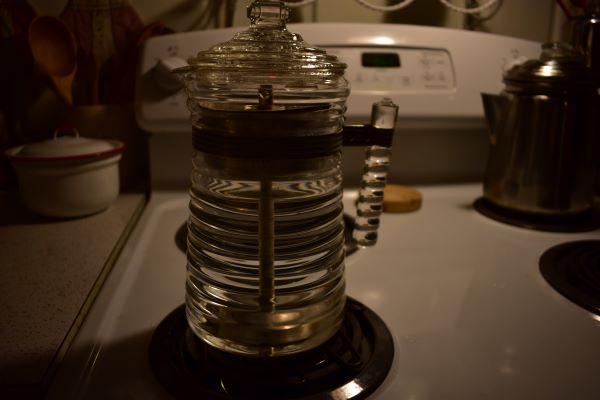 Charles is using his early 1930s coffee pot now.  In 1943 we would not have had many new items so we are using items from 1930s and items before that. 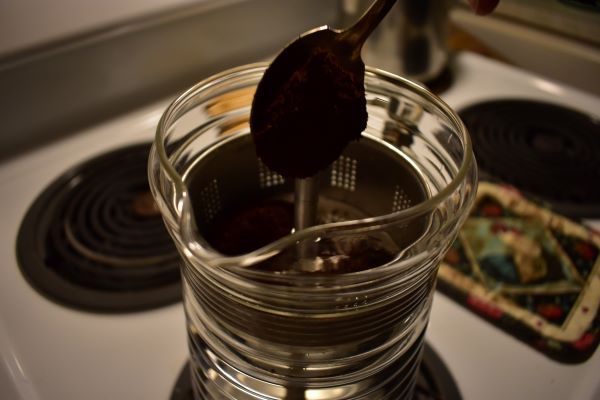 Charles has had a struggle with his coffee ration just like Lena in her diary that we are reading.  He is trying to do better. 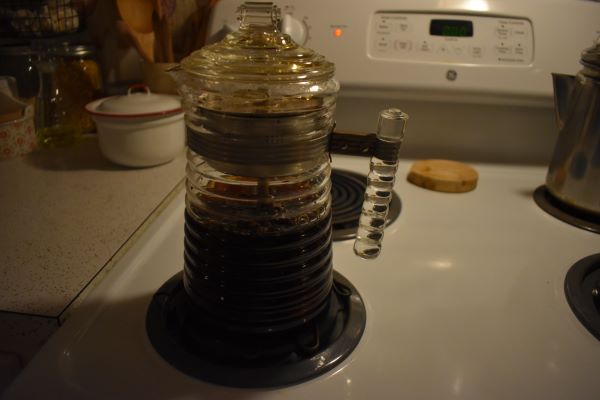 Right now we are on number 25 coffee ration stamp and Charles was able to get one pound of coffee on February 8th but this has to last one week longer than the previous stamp and the last time Charles ran out of coffee.  So now he cannot get more coffee until March 21.  We will see if he makes it or if he will get into our reserve that we have for bartering.  I know that people bartered during the war and my coffee ration can be used to barter for something else that we might need.  If I drank coffee, I would not have that to use for bartering.  Hummmm, maybe I should barter with Charles until he can get another pound. :)  He has been experimenting and he made some Roosevelt coffee last week which was saving his grounds for the next pot and adding one teaspoon of fresh coffee to that and then percolating. 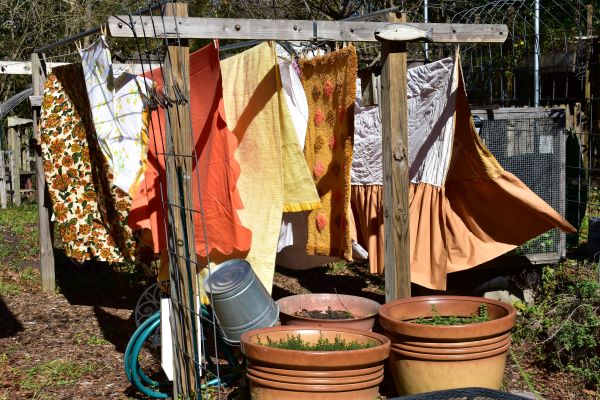 Charles and I have been very busy lately working up at the lake to help a family member and cleaned out an old shed and old workshop.  A limb went through an area of the old shed and many things got wet and ruined.  Some things I have been trying to salvage for donations so there has been a lot of washing and cleaning so the items that could be donated are clean instead of stuffy donations.  I was thankful to have a nice sunny windy day to dry all these linens that I brought home to wash.

We are still not finished working up there and we have exceeded our gasoline rations for the study but we could not help this.  We will be back on track soon.   Charles fixed the roof and this project has turned into much more cleaning that needed to be done.  There comes a time of letting go of things and when someone that you care about is ready to let go and needs help then we need to stop what we are doing and help them. 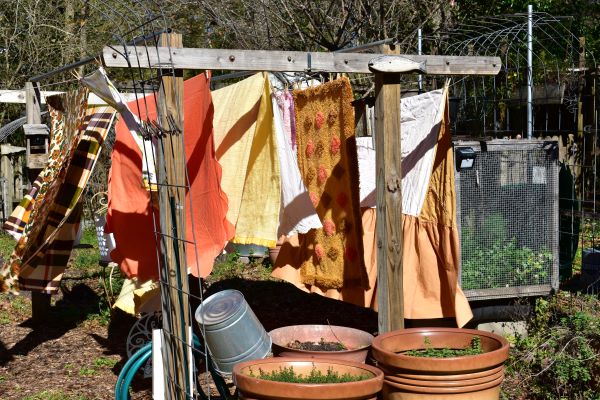 There were a lot of changes during the war and adjustments had to be made by the ration board.  So we have to read the paper each week to find out what is going on.

On February 21st, our newspaper is telling us that stocks of dry edible beans, dried peas, lentils and dehydrated and dried soups along with processed and canned vegetables and fruits to be rationed beginning March 1st.  These foods have been added to the ration list because of extremely heavy demands by the American armed forces and the Russian army.  Pending the start of rationing retail stocks of these commodities were frozen last night (Feb 20th 1943) they will not be available to consumers next week.

The reason is that supplies beans, peas, lentils and dried soups had dwindled considerably in recent weeks because of short supplies of meats and other high protein foods.

About 46,000 war ration book 2 will be distributed in the county and the city. March 1st you will be issued a ration book with 48 ration points for one month. People can pool their points because this will average 3 cans per persons per month.  It takes 21 points to get a can of peaches or pears, standard size can. 14 points to get a can of corn or green beans.  16 points for a can of peas or tomatoes and 13 points a pound of frozen fruits or vegetables.

We need to remember that during this time of ww2, there were not the same fresh vegetables in the grocery stores as they are today because people ate more seasonal food and canned food was needed.  This is why it is so important to can those fresh peaches and pears during their season and beans and tomatoes when those victory gardens are harvested.  Home canned items did not require rationed stamps and during harvest season of fruits the government issued extra sugar for canning for those jams and jellies but the extra sugar had to be applied for canning.

Reminder February 9th shoe rationing began and only 3 pair of shoes may be purchased during one year. (remember rationing changes as we go through the study, some gets tighter and some will loosen a bit depending on supplies).

Casablanca will play at the theater on Tuesday, February 23rd.  Bob Hope and Dorothy Lamour in the movie, "They Got Me Covered" coming soon. 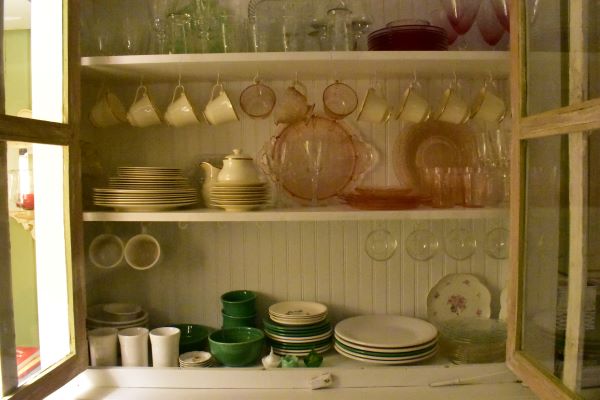 Changes in our home, I made some changes to our china cabinet.  We added some meadow green dishes to our Fiiestaware.  We already had some cream color Fiestaware.

Fiestaware was manufactured in 1936. Charles and I started purchasing pieces a little at a time after we were given a gift of a two place setting from our children.  We do not have the old Fiestaware because the older Fiestaware has lead.  The newer fiesta ware does not have lead.  They stopped putting lead in the Fiestaware in 1992.  Fiestaware would have been used in homes in 1943. 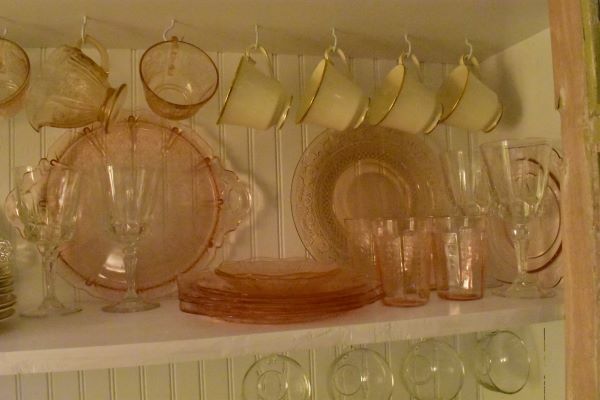 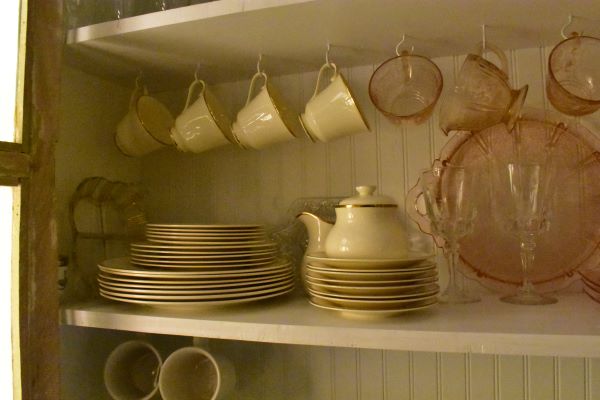 Then there is the bone china that I already had in the cabinet.  Little by little I am adjusting our home to 1943. So you will be seeing these dishes being used during our study. 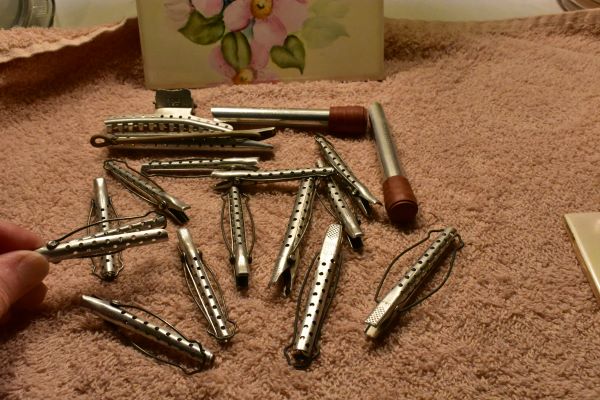 I also pulled out the old hair curlers appropriate for the time of this study. 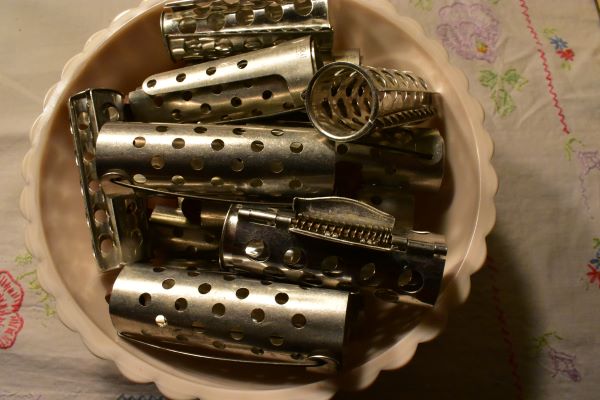 Quite different from what we have today but what I like is that hair does not get stuck in the curlers and they can be washed in good hot soapy water to clean.

So that is what is happening this week.  Time to do some menu planning for meatless days and fill in's for shortages and times that we are out of stamps.