We now continue the diary of Theodore and Nellie.  Theodore is the writer of this dairy and we started in January and have read January, February and March, 1905. Now we continue with April.

You can find the January, February and March in the diary section on my blog in the upper right side that say's Donna's Diary Posts. 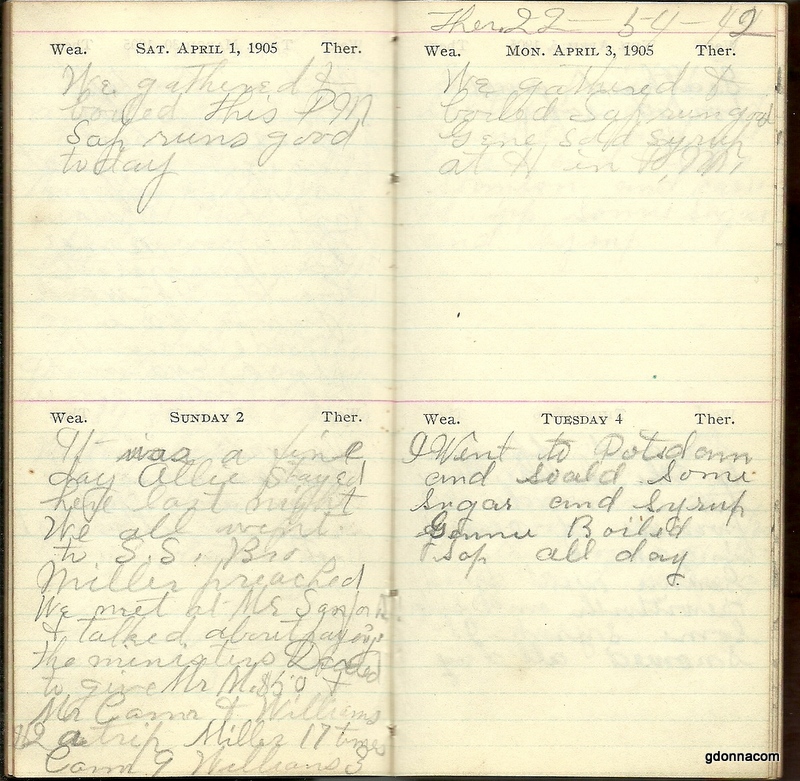 We gathered and boiled this P.M. Sap runs good today.

It was a fine day. Allie stayed here last night. We all went to S.S. Bro Miller preached. We met at Mr Sanford and talked about paying the ministers Deaded to give Mr. M. $50. and Mr Carm and Williams $2.00 a trip. Miller 17 times Carm 9 Williams 3.00

I went to Potsdam and sold some sugar and syrup. Gennie Boiled sap all day. 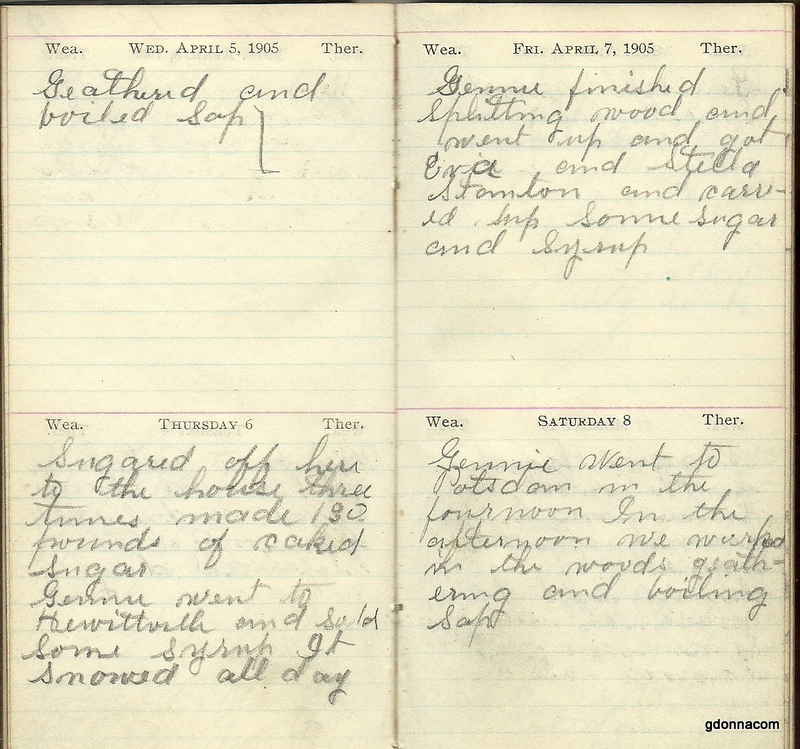 Sugared off here to the house three times made 130 pounds of caked sugar. Gennie went to Hewittville and sold some syrup .It snowed all day..

Gennie finished splitting wood and went up and got Eva and Stella Stanton and carried up some sugar and syrup.

Gennie went to Potsdam in the fournoon. In the afternoon we worked in the woods gathering and boiling syrup. 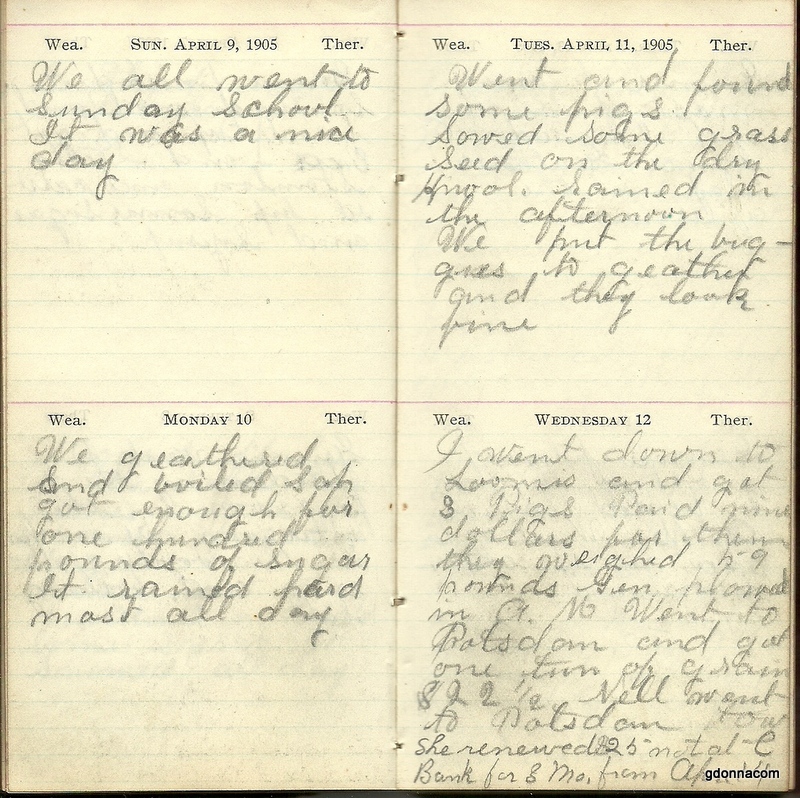 We all went to Sunday school It was a nice day.

We gathered and boiled sap got enough for one hundred pounds of sugar. It rained hard most all day.

Went and found some pigs. Sowed some grass seed on the dry knool.(knoll a grassy hill) Rained in the afternoon. We put the buggers (pigs) together and they look fine.

I went down to Laomis and got 3 pigs, paid nine dollars for them, they weighed 59 pounds. Gene plowed in a.m. Went to Potsdam and got one ton of grain $22 1/2. Nell went to Potsdam too, she renewed $25 note at Bank for 8 months from April. 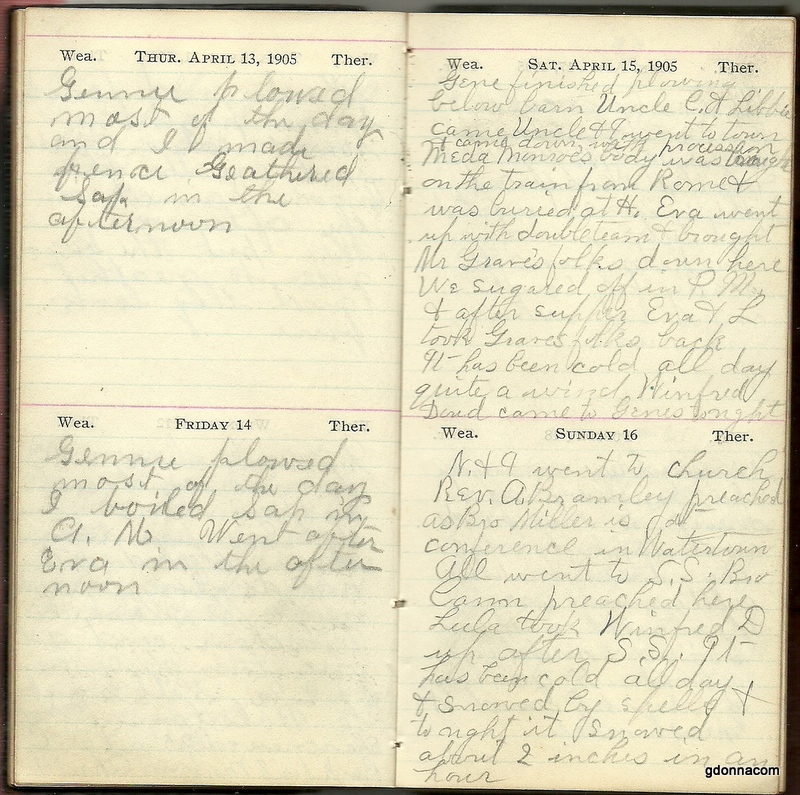 Gennnie plowed most of the day. (Theodore calls his son Gene or Gennie) and I made fence, gathered sap in the afternoon.

Gennie plowed most of the day. I boiled sap in a.m. Wend after Eva in the afternoon.

Gene finished plowing below barn. Uncle C and Libbie came, Uncle and I went to town and came down with procession Meda Monroe's body was brought on the train from Rome and was buried at H. Eva went up with double team and brought Mr. Graves folks down here. We sugared off in P.M. and after supper Eva and L Graves folks back. It has been cold all day, quite a wind. Windfred Dend came to Genes tonight.

N (Nellie) and I went to Church. Rev A Bramley preached as Bro Miller is at conference in Watertown. All went to S.S. Bro Camn preached here. Lula took Winfred D up after S.S. Has been cold all day and snowed by spells and tonight is snowed about 2 inches in an hour. 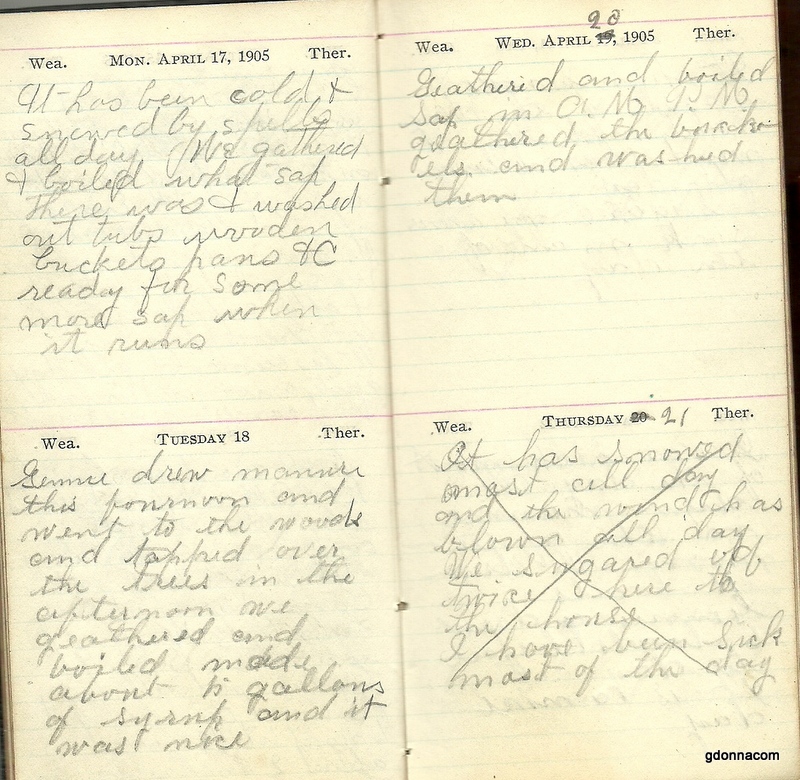 It has been a cold and snowed by spells all day. We gathered and boiled what sap there was. I washed out tubs wooden buckets, pans and C ready for some more sap when it runs.

Gennie drew manner this forenoon and went to woods and tapped over the trees in the afternoon. We gathered and boiled made about 5 gallons of syrup and it was nice.

Gathered and boiled sap in a.m. P.M. gathered the buckets and washed them.

It has snowed most all day and the wind has blown all day We sugared off twice here to the house. I have been sick most of the day. 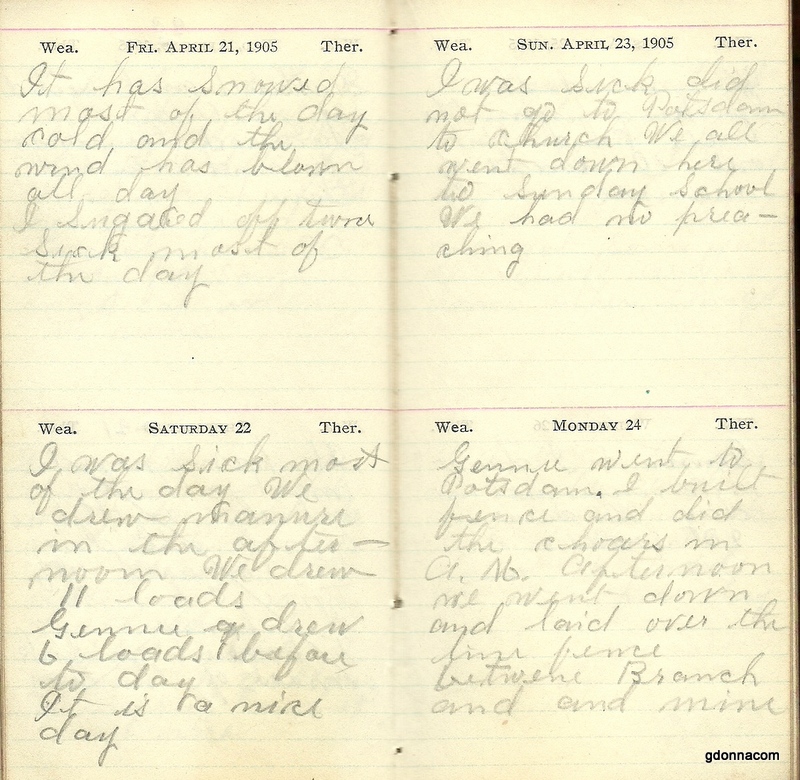 I was sick most of the day. We drew manure in the afternoon. We drew 11 loads. Gennie drew 6 loads before today. It is a nice day.

I was sick did not go to Potsdam to church. We all went down here to Sunday school . we had no preaching.

Gennie went to Potsdam. I built fence and did the chores in a.m. afternoon we went down and laid over the line fence between Branch and mine. 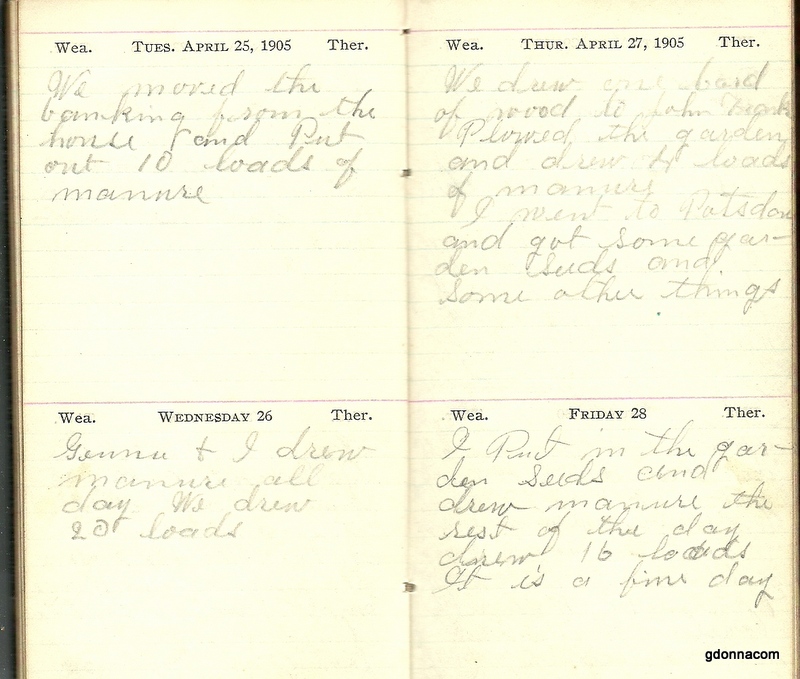 We moved the banking from the house and put out 10 loads of manure.

Gennie and I drew manure all day. We drew 20 loads.

We drew one load of wood to John Frank. Plowed the garden and drew 4 (or 11) loads of manure

I went to Potsdam and got some garden seeds and some other things.

I put in the garden seeds and drew manure the rest of the day. Drew 16 loads. It is a fine day. 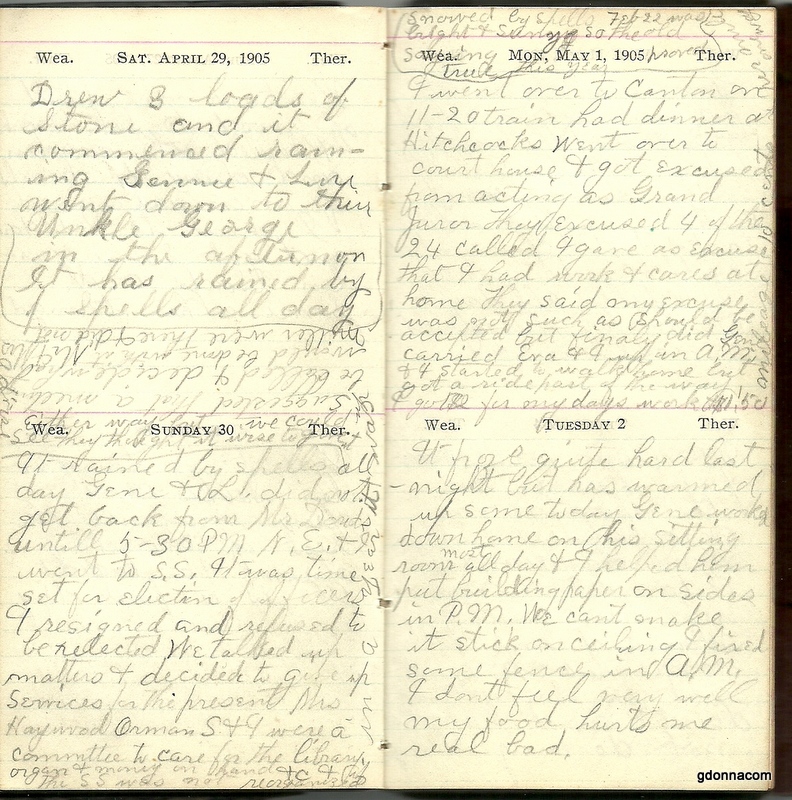 Drew 8 loads of Stone and it commenced raining. Gennie and Lila went down to their Uncle George in the afternoon . It has rained by spells all day .

It rained by spells all day. Gene and L did not get back from Mr Darids ? until 5:30 P.M. Nellie, Eva and I went to S.S. It was time set for election of officers. I resigned and refused to be elected. We talked up matters and decided to give up services for the present. Mrs. Haywood Orman S & I were a committee to care for the library organ and money on hand the S.S. was not. Reorganized and C & if in a year it was suggested that a meeting be called and decide what would be done with it. Mr and Mrs Miller were there and did not advise either way but we could see that they thought it wise to give it. (I got lost here and could not unscramble it. )

We will pick up in May. Two days left above it you want to decipher the writing. :)