Rationing Information for the study 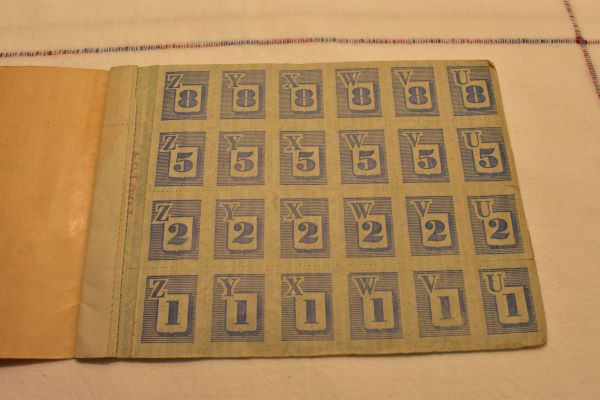 If you have happened upon my blog, we are about to start an new History project living like 1943 for a year and I am posting each day information about this project for those that are doing this study with us.

This post is information that explains the history study of what would have been going on the latter part of 1942 and then entering 1943.

I will get back to normal posting after we get started but I am sharing this information for all of those interested in doing this study with us this year or enjoy following along. There is still much to learn even if you are not actually doing the study.  Charles and I had so much to learn about 1943 that we are going back again.

This information below was given to citizens so they can understand the rationing system and how to use their ration stamps.

In the newspaper in December 1942 we get this information. First remember for those doing or following the study that we are still using war Ration book No. 1 and to remember these stamps have nothing to do with money.  To purchase rationed food they had to have money plus ration stamps.

Ration stamps will take on a new importance in the buying habits of the American housewife when War Ration Book No. 2 is put into the public's hands.  The new book, which will be issued in January, will be used to ration goods under a "point system," which is different from the straight coupon cashing under sugar and coffee rationing.

Sugar is rationed by a comparatively simple method known as the unit system.  Under this system, the total supply of sugar available for civilian use is divided on a per capita basis, allowing each person an equal share.  Sugar can be rationed in this way because it is an essentially uniform article and the supply is large enough so that everyone can have a useable quantity.

While the unit system is excellent for rationing sugar, it cannot be used for rationing food stuffs that are diversified,  Using meat as an example, OPA officials said it would be impossible to divide the total supply of each kind of meat on a percapita basis because there are too may types of meat  (beef, pork, veal, mutton and lamb, for example), and too many grades of each type and cut.

The point rationing system is designed to ration foods that, like meat, cannot be rationed by the unit system.

Under the point rationing system, the Government will group scarce commodities that are similar or related and ration the whole group.  Each commodity in the group will have a point value.  Every consumer will be allotted a certain number of ration points to spend for any of the rationed items.

The stamps in War Ration Book No. 2 are worth 1,2,5 or 8 points.  In addition to the point value, each stamp has an identifying letter to indicate the time period in which the stamp may be used.  Purchase of rationed commodities must be paid for with point stamps and money.  The same stamps will be used to buy any of the rationed items in a particular group.  Different commodities will have different point values.  A pound of one kind of meat might be valued at 8 points, while a pound of another kind of meat, slightly more plentiful, might be valued at 6 points a pound.  Consumers will spend their points on the basis of individual preference.  The government will determine the point value of each commodity on the basis of supply and demand.  A low point value will be given to those that are comparatively scarce.

So how do we jump in to this living like the past history study?  As I am typing this it is December 29th 2021 real time and we are starting a history study on January 1st.  Since we are studying 1943 then we are leaving out of 1942 with our War ration book one.

I will pick up on October 9, 1942 the paper announced that Sugar ration stamp No. 9 will become valid November 1, 1942 and will remain valid until December 15th.  That stamp would be good for 3 pounds of sugar.

People have done their Thanksgiving and Christmas cooking and the December 16th valid stamp came in time for Christmas and what was not used will need to last until January 31 1943.

So our coffee situation is that coffee rationing started on November 29th but stores were closed so it actually started on November 30th 1942.  The stamp used was Stamp 27 in war ration book No. 1.  That stamp value was one pound of roasted coffee.  It was for age 15 and above and we remember each member in the family gets a stamp but under age 15 the coffee ration stamp is void, it can  not be shared.  That coffee stamp 27 book one expired on January 3 1943.

We are leaving 1942 with a supply of sugar that will last if we are careful to January 31 and our coffee ration stamp is expiring on January 3rd if we have not already used it. To do the study proper we probably should not have more than two pounds or less of sugar per person in the household since we just have ended our holidays. For Charles and I, we are starting off January 1st with 2 pounds of sugar in our sugar canister.  We are still deciding about the coffee figure. There were also shortages of different items and during this time even though someone had the money and the ration stamps it might not have been available.

It will be different for us because of our last two years of shortages and concerns of supplies in real times.  With rationing we cannot stock up.

I hope you find this information interesting.  I will be glad when my posting will have pictures of our home and what we are doing around the house and that will happen soon.  I am still trying to figure out what two nightgowns to keep for this year.  I guess one warm and one cool?

We will learn about the gasoline rationing and the car tire inspections required.  We will also learn about fuel oil which will affect us this 1943 since we heat with kerosene.

Charles is looking forward to reading and listening to the old radio shows again while I do the evening mending.   More about all of this as we make our way through this time.  I know some of you are very excited and I can see you in my mind going through your clothing, and figuring out how to get everything down to a more 1943 amount and Judi, I hope you find your apron. :)

Catherine is going through her cookbooks and Sheri is excited about changing an era, leaving the 1930s into the 1940s.

This is the year to eat fresh vegetables.