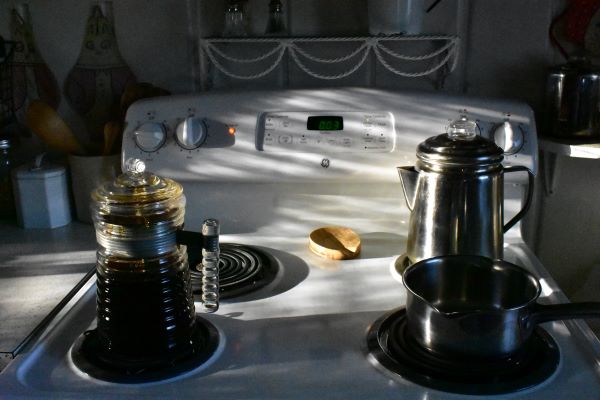 We can tell the month of the year by where the sun comes into our home.  The dining room window faces east and the sun has moved over enough now to reach the stove.  I love how the sun affects our home all through the year as it rises and sets at different points each day.  Many people never pay attention to this but it is part of God's perfect plan and there are so many things for us to notice if we just would take the time to do so.

This sunlight will only be in this area for a short time, each morning it will move to a new location ever so slowly throughout the house. 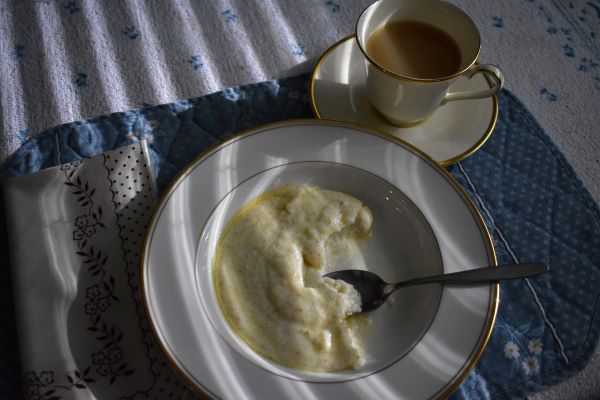 We should adjust our life to where we do not miss the important things and we should teach our children to do so too. 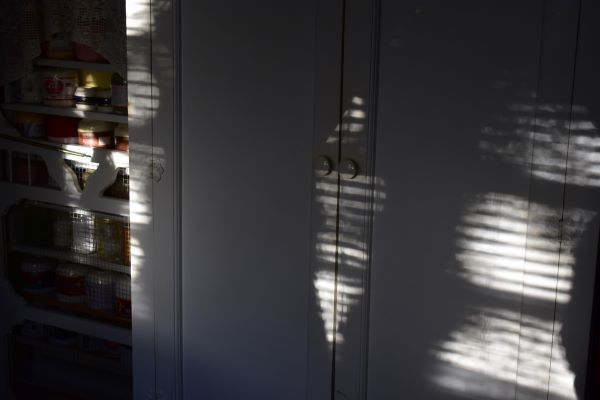 The sun has been low to the south during winter and as it moves, it not only affects what we see in the house, it affects our garden too. 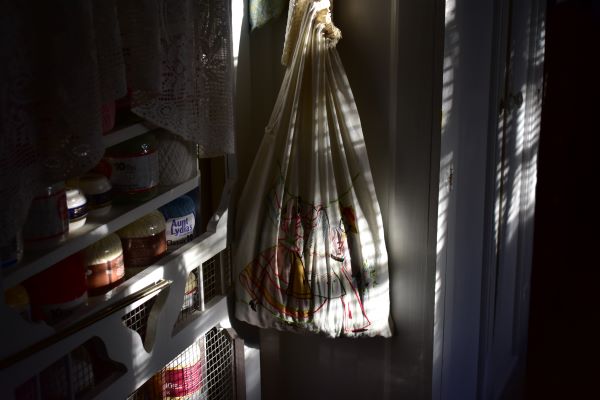 It is getting planting time here, we just got passed a freeze. Charles and I covered what we could and hopefully the freeze did not last long enough to damage the baby fruits on the trees, so far things are looking pretty good.  I hope that was the last freeze. 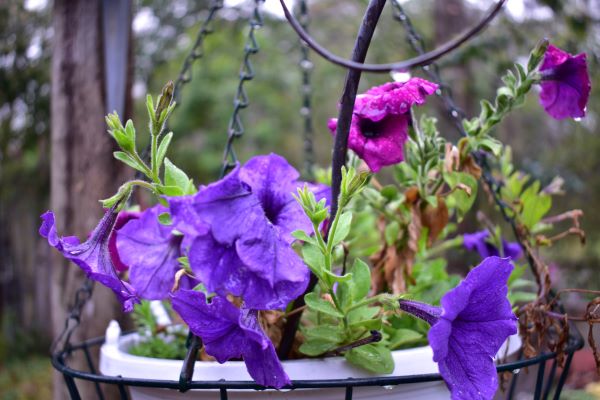 Our petunia made it through the cold. 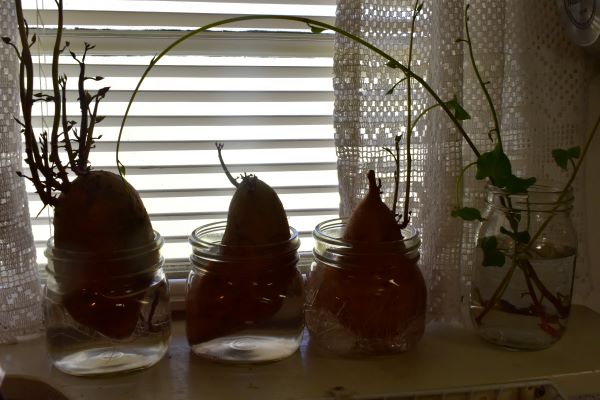 I have sweet potato slips growing on our window ledge.  It will be quite awhile before it is warm enough to plant them and we have our experimental one in the large pot outside.  We have to think ahead and plan to grow a garden. 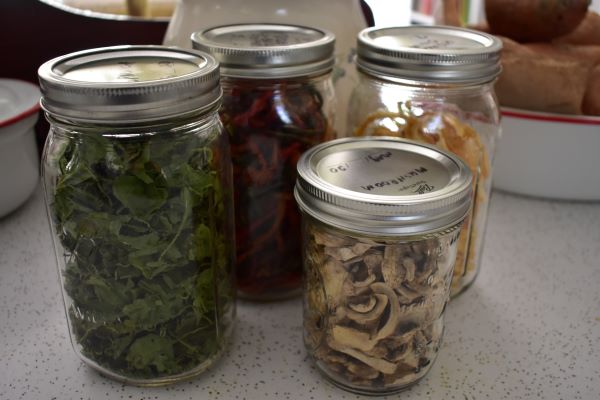 Since we have one foot in 1943 and one in 2022 it is starting to be a concerning time for us because our history project is during world war two and our real time of 2022 is becoming concerning because of the continued bombings of Ukraine.

I feel that if we live a prepared life in a organized but simple way then we can go on about our life without worry or be standing in a long line waiting for help should there be a disaster.  There are many reasons, storms and natural disasters and if we are honest, a concern about war.

Besides having our home more prepared for a long term outage, we should also have a grab and go plan in case we should have to evacuate quickly and each of us have our own needs.  Many people live alone and many have families so it is best to study suggestions that are put out by our governments emergency planning lists. Here in the U.S.,  Ready.gov gives information on preparedness.  Charles and I have grab and go backpacks and dog items and pop out kennels.  I have mentioned this before on this blog. 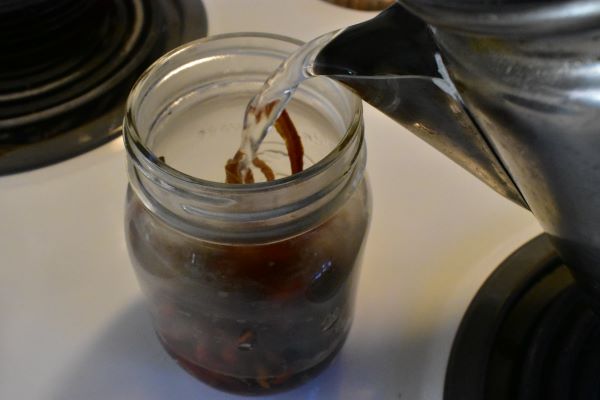 I thought about how people mostly use their dehydrated vegetables as ingredients in soups or casseroles but I wanted to see how it would be on a pizza.  When I looked up Pizza in the 1943 I was surprised that I did not find anything about pizza except for obituaries and that was because their last name was Pizza.  So the Pizza was not yet popular.  I searched the entire united states and there were a few states that were starting to make pizza but this was a new thing.

So after taking these pictures of the pizza, I learned it is not something we would have eaten in 1943.  I will post this anyway because it is actually about rehydrating dehydrated food. 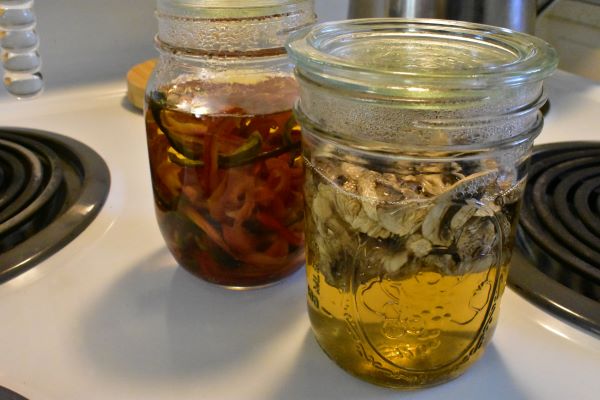 So I rehydrated some bell peppers and some mushrooms by pouring boiling water over them and let them sit for half hour. 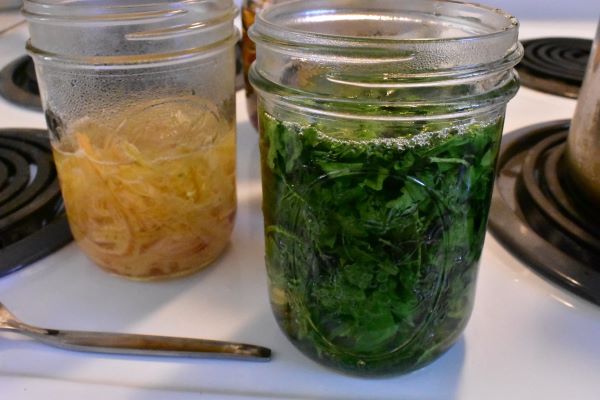 I did the same for spinach and onions that I had dehydrated last year. 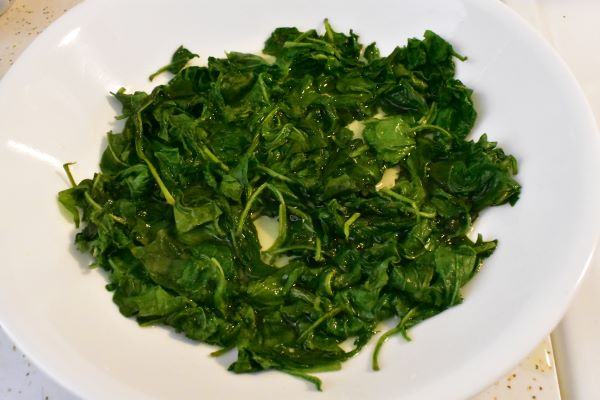 I let the spinach sit in boiling water for about 20 minutes because spinach leaves are more delicate.  This is what it looked like after that soak.  But everything that soaked needed more rehydration.  It is not safe to rehydrate dehydrated food at room temperature but it can be done with either boiling water or in the refrigerator. 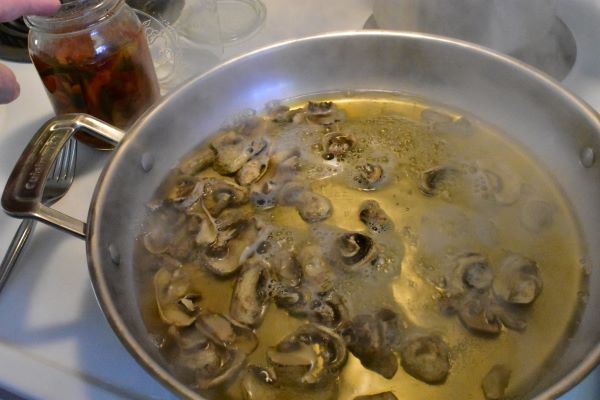 So after I soaked the different foods in boiling water, I took a large skillet and I put the leftover water and the item such as mushrooms and put a lid on it and let it simmer until all the water was cooked out.  I did each item this way.  By doing this all the juice and flavor remained in the food item and it was done slowly. I also added salt and pepper about halfway through this process. 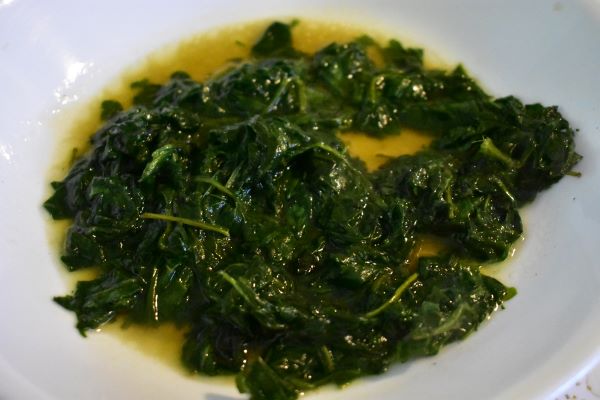 This brought it back to a much better state, dehydrated food can not come back to fresh food stage but is good to use when we do not have the fresh food in the house.  Some food items I prefer dehydrated and some canned.  Cans weigh a lot and take up more space and dehydrated food is light and compact. 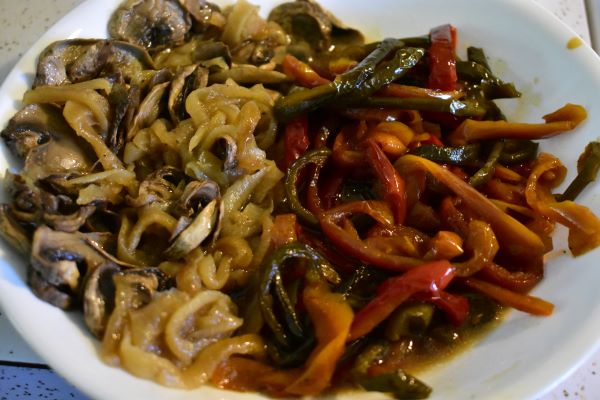 It takes a little practice rehydrating our dehydrated food but many things we do takes practice.  So this was part of the topping for our pizza after I rehydrated it.  Bell pepper, onions, mushrooms and spinach. We like thin crust pizza and we make them from homemade tortilla dough. 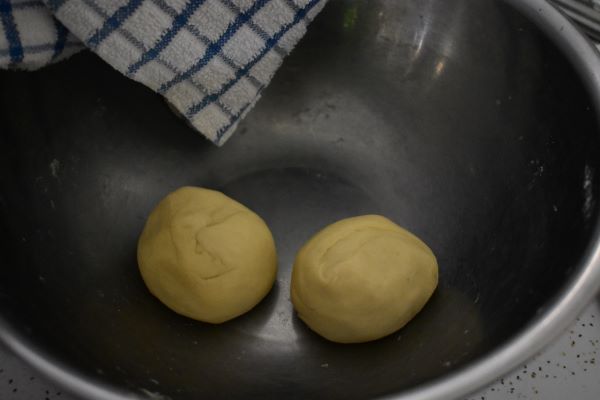 We are making four small pizzas and we are rolling two and the other two are resting in this bowl that we will make to have some extras in the fridge for a quick lunch the next day. 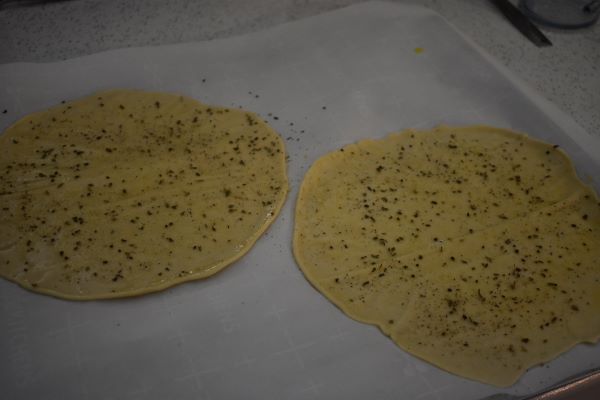 We put olive oil over the top and seasoned it with cracked pepper. 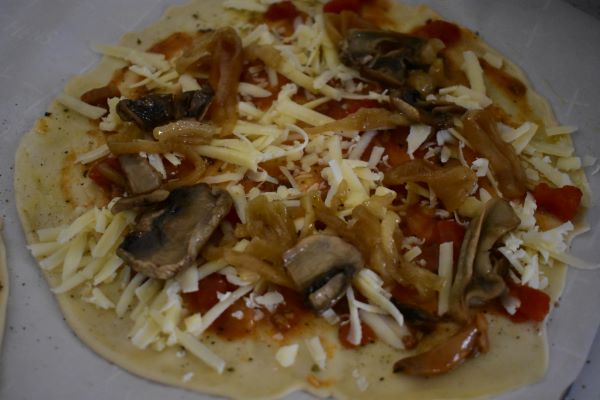 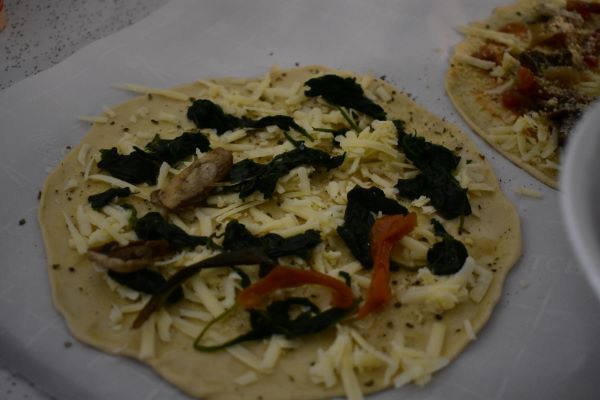 If we did not have fresh cheese, we would put the dried cheese over olive oil and then top with dried cheese such as Parmesan-Romano.  We always cover the top of the dough with olive oil. 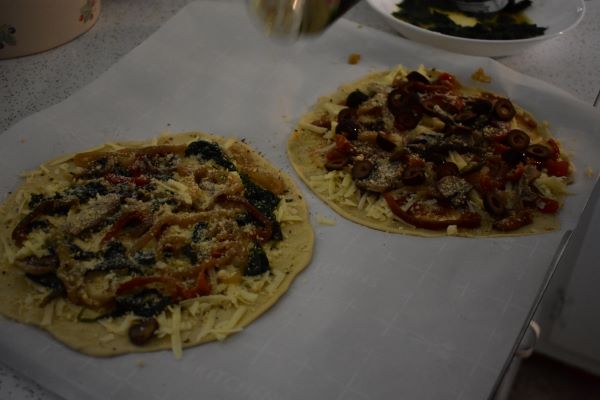 Photo before going in the oven.  You could use pizza sauce, we just normally make our pizza without it but it is good with it too.  We also used some canned black olives.

This could be made with shelf stable canned items, such as canned mushrooms, canned spinach, canned peppers etc.

Everything tastes better if we use fresh ingredients but the purpose of keeping canned items is to use it when we do not have fresh food items in the house. Very good for us during hurricane season but now today storm season seems to be all year around and food shortages are becoming more common.

On something like a pizza and using rehydrated vegetables, using seasonings can help perk it up so to speak. 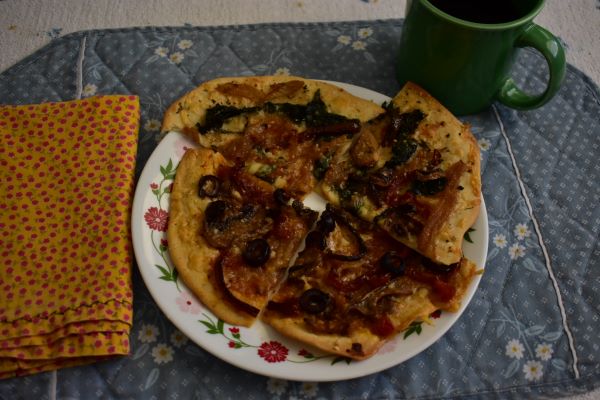 I thought I forgot to take pictures after the pizzas were cooked but I found that I did. :) 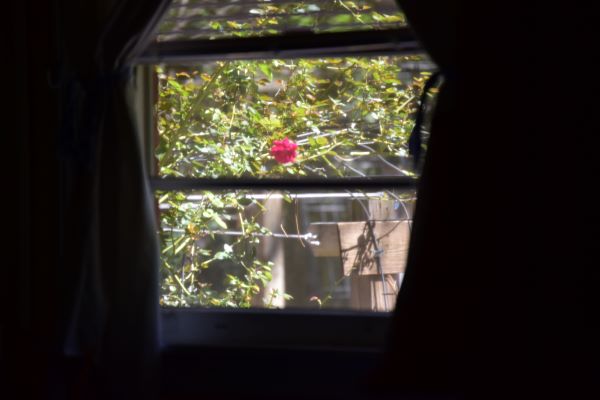 We have a energetic rose that bloomed ahead of all the others.  It went through the freeze and it is beating all the odds so I look at this Rose and I think, "If we feel like blooming or dancing, just do it".

Ron has his own youtube channel called, Frontier Patriot.

1940s life then and now, the missing closets.