If We Keep On Moving 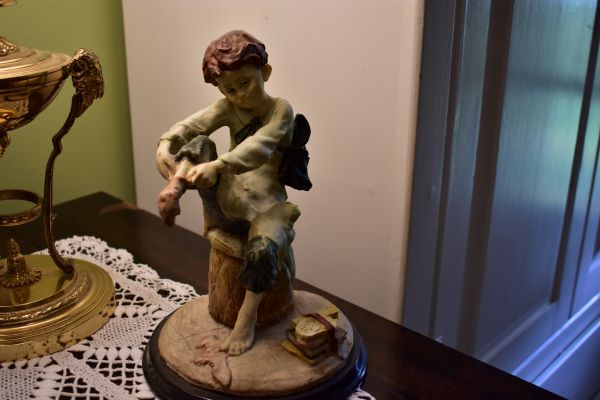 Sometimes we find ourselves in overwhelming situations and some household projects and chores seem too much to complete.  But if we keep on moving in the right direction it can eventually happen.

I love this figurine shown above because it reminds me of a more simple time. I love to imagine stories about this little boy and I do not see him as poor but as a child that will be running along to school with his slate, book and lunch getting fresh air and exercise.

For the last year and so many months now, just like many people I have felt lethargic and in a brain fog of sorts with the events in the world.

But during this time I have been working towards a goal of having our home sorted and looser for easier cleaning.  The more I have worked towards this goal the messier the home has gotten because of pulling everything out of drawers and closets and opening storage boxes. 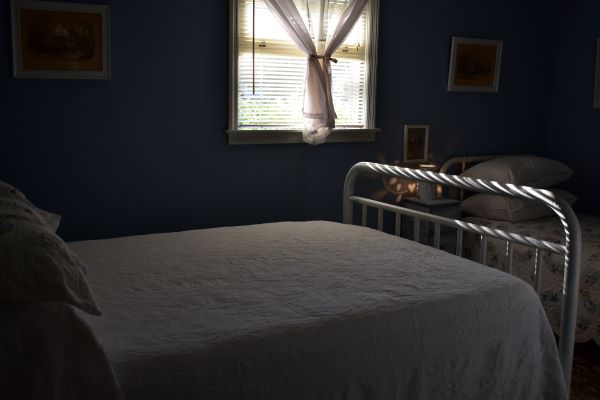 This bedroom has held a lot of the sorting items and I was at a point several times that I have thought it will never get finished.

It may never be as perfect as I had imagined but each day something, even if it is a tiny thing gets done.

Each time I tackle another cabinet or box or closet it all piles up here.  But now it is getting looser and this is a wonderful thing. 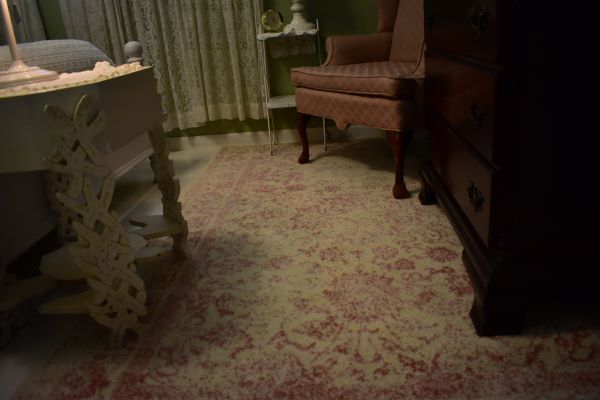 During all these months I shifted and re-arranged over and over and I finally could see how it needs to be.  After completing this room I ordered this area rug I had been saving for to have a sitting area on one side of this bedroom. It is like knitting house shoes, when one is complete we still have to start another one to complete the set. 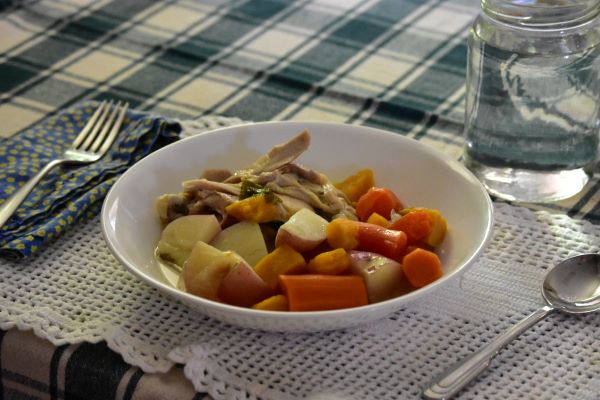 I am working on a house menu for our home. Charles is very excited about this and so am I and when I am finished I will share with you what it is all about and what it looks like. 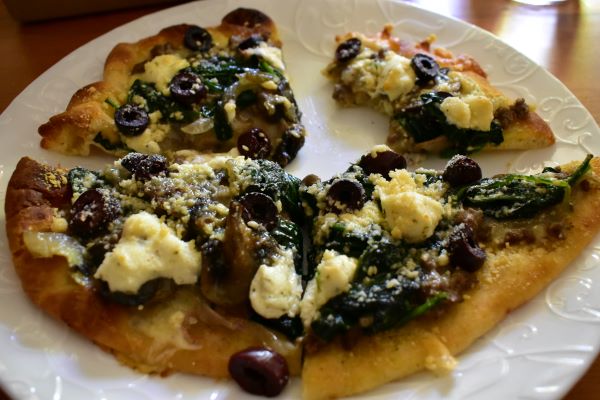 It is something anyone can do and is and idea I had after a conversation Charles and I had over breakfast one morning.  We all eat differently and enjoy different types of food so this will be for anyone.  I will make a post about this soon. 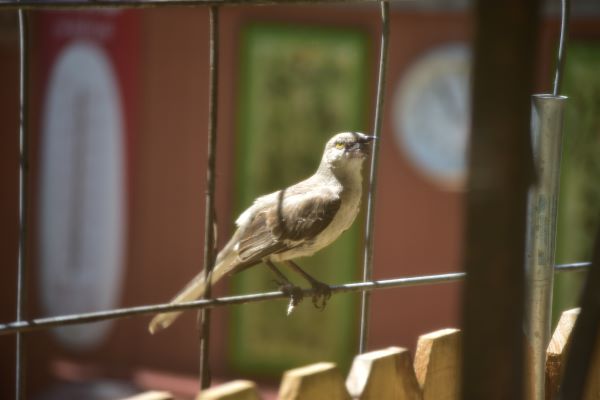 The other morning I had a visitor on the back porch area on the cucumber trellis. The birds have been getting a bit tipsy on the mulberries because the heat has made some of them ferment.  We can only reach the lower limbs to pick the berries. This little bird was quite wobbly as some of the others have been. 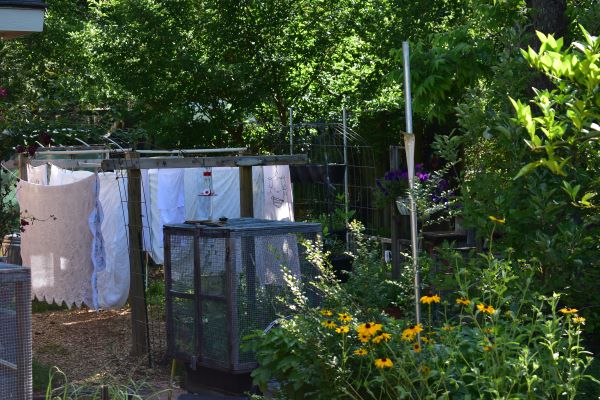 But they have been quite troublesome.  Early the other morning I washed a lot of bedding from the rooms I had finished cleaning. Blankets, spreads, sheets etc and got them out before the sun was up.

Charles came in several hours later, "You might want to come outside to see something, I don't think you are going to like it very much.".  Me, "Is something wrong?  It sounds as if something is terribly wrong!". Charles, " You need to look for yourself".

Well, the birds had been eating mulberries and flew over the clothesline.  Redish/Purple spat on all the washed bedding!  Boy was that an ordeal rewashing and getting the stains out!.  But it was done and the bedding is now especially clean. :)  It is a good thing I stick to a lot of light colored linens so they can be bleached because berry stains need bleach. 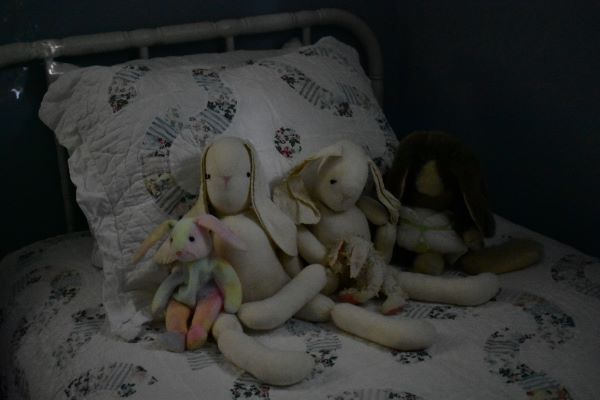 The naked bunnies are still waiting for me to make their clothing.  I removed them from the sewing shelf and put them on the bed and told them that I will be making them clothing very soon.  I have told them this before but I have encouraged them that I really will do this soon. 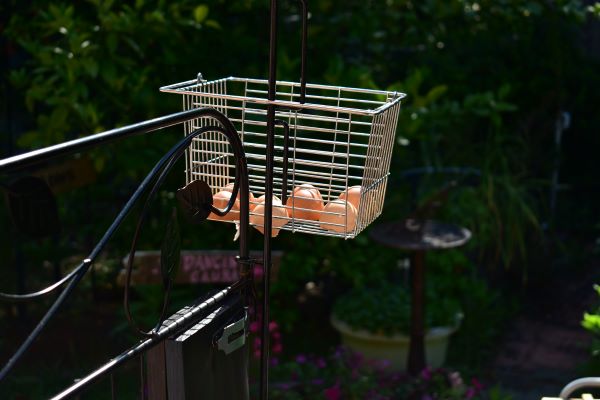 The new composting worms are doing well, I took a metal basket I no longer use and have started using it to dry washed egg shells to be crushed up to put in the worm buckets so I have another way of composting the egg shells now.  I like composting so not as much waste goes to the landfill.  I hope we can get to where we have very little waste from our home and little plot here where we live. 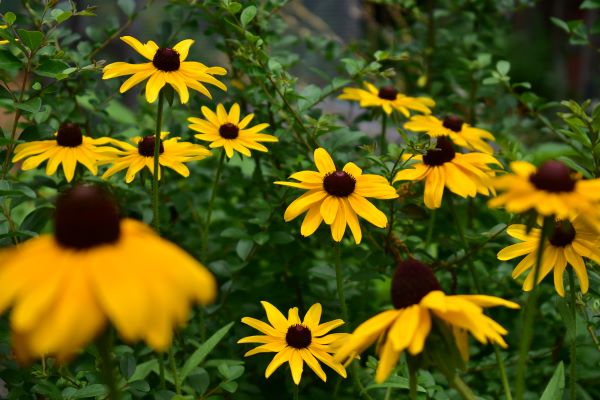 Here where we live we are having a Panic Manic going on at this time I am writing this post.  Our city and surrounding cities and states are running out of gasoline/fuel.  Between a driver shortage and a Cyber attack on the pipeline it has given people another reason to Panic buy causing a shortage into being an outage.

Charles and I have our own plan and that is to buy 1/4 tank of gasoline every time the tank gets to 3/4, if we can find any.  We will not go anywhere other than Charles to work his job which requires a lot of driving and to get groceries only when needed and Charles can do that when he is already out.  We will go nowhere else.  Now this would work if everyone would do this but since most people do the opposite now there could be a lot of people out of work if they cannot get to work. Time will tell us how this is going to turn out. I will just keep sorting and cleaning... 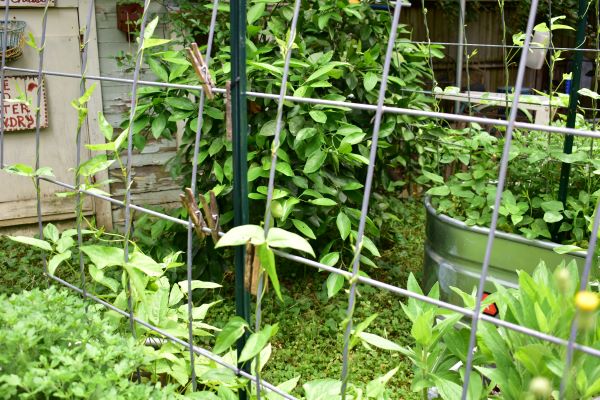 On days I do not get a lot of sorting done, I still do that one thing each day that needs to be done.  I have been weeding out in the garden one place at at time.  But I wear a big hat and a rain coat right now so I don't get mulberry splats from the drunken birds! Lol

It is difficult to tell but the beans are twisting their way around the trellis wire on their way up and over the trellis arbor. There are some on the other side and my hope is that they will both reach the top and cross over and all the beans will hang through the wire so I can go under the trellis to harvest them. 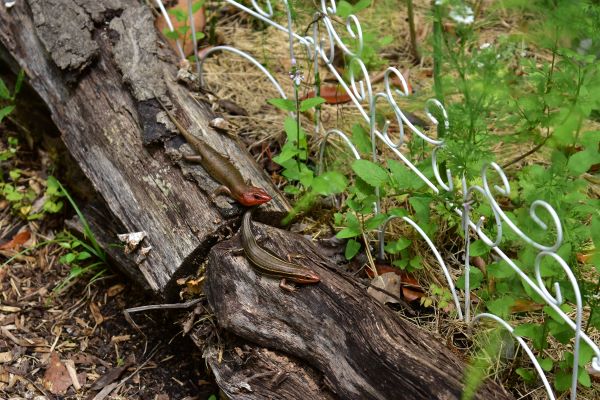 There are very good reasons for leaving part of our garden space a more natural habitat. It is good to use logs and leave some weeds behind so the insects and reptiles can reproduce.  We need to help the area where we live to be able to establish a ecosystem of sorts.  In the middle of this picture above are two skinks.  They run around all over our garden and give me a scare sometimes when they run across my feet but the cute little chipmunks do the same thing.

I mentioned several years ago on a post how we had ants crawling all over some okra that was growing in our garden and I was unhappy about the ants until noticed that the ants were corralling the aphids and the aphids will destroy some plants so I left it alone and the war around the okra left the okra growing just fine. 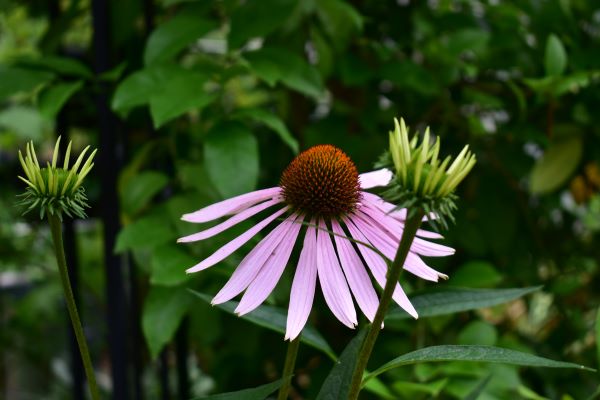 This is such a joyful time in the garden when greeted with the vibrant and pastel flowers.

I hope you all are well and safe and whatever you are working on just keep moving because time will not stay still and it is better to have a little bit done than none at all. This can be cleaning, or sewing, knitting or building.  It can be preserving food or learning to dance.  It can be painting or tilling a garden.  Make it whatever you want it to be but just keep on moving.

Are you waiting for something to happen?