Thanksgiving week flood and Windsor is Back 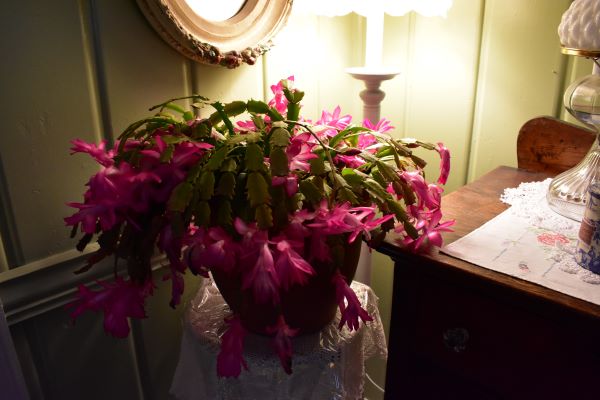 Today is the first day of December.  This cactus is a Thanksgiving cactus that blooms out during Thanksgiving week and continues to bloom for a good while during December.  There are Christmas Cactus as well and I have no idea the difference other than when they bloom. 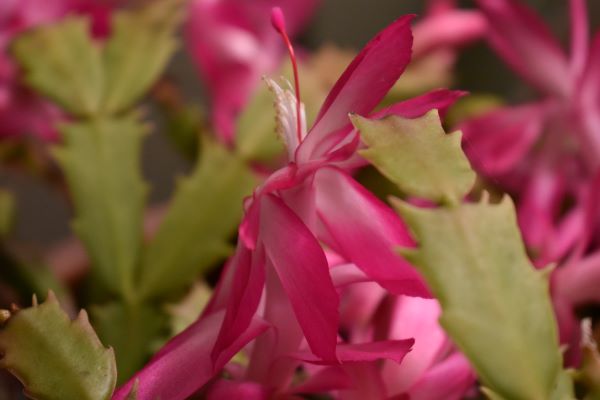 The blooms are so beautiful.

You may have seen that some houses built long ago have a door on the side of the house that enters into a laundry/storage room that is built into the house but can only be entered through the outside door. That is what we have.

I am not one to be brave in the dark. One night long ago I had gone out in the dark to get clothes out of the dryer (this when I was working a full time job outside the home). I was in the laundry room and Charles had come outside and quietly walked up to the open door and leaned back on the car watching me, probably there to protect me but forgot to tell me he was there and as I turned around with my arms full of laundry he scared me so bad that I lunged at him to attack what I thought was a stranger. So you can imagine this scene. So after that I insisted that we were moving the washer and dryer inside the house.

The old laundry room is a  storage room and it holds the hot water heater as well but we still call it the laundry room. 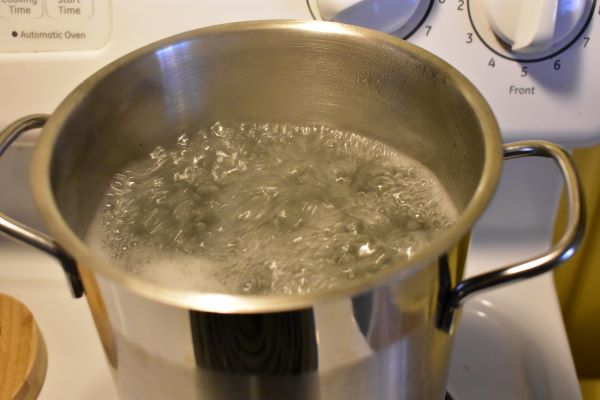 Last week, days before Thanksgiving Charles was getting ready to leave for work and he keeps things he needs for work in that storage room because it is next to where the car stays under the carport. So he went out and opened the door and water came running out. A pipe that was where the old pipe to the washer was had been leaking from the pipe, not the faucet.

So he started rushing things out that were sitting in water and then started sweeping water out. He put a bucket to catch the dripping pipe. He came in and said I have some bad news and told me what happened.

He had to get to work and did not know what to do because there was chaos under the carport with a lot of things pulled out. I went outside with him and we shifted some heavy things away from the pipe, one was the Chest freezer and one was Windsor, the 1920s ice box, both very heavy. I told him to leave and I would call the plumber but it was very early and a couple of hours before being able to phone the plumber  Charles called the number before he left but got answering service and told her to please let them know and he went to work.

So I went back out to check the drip and trying to figure out how often I needed to check.  Went back out, still good only 1/4 full...

It was about 9:00 and no one had called back so I called and she did not know about the call so she took information and said it could be anywhere from an hour to all day before someone came.  I went back out to check and the drip was no longer dripping but spewing everywhere!

I swept the water out and ran in and called and asked could someone come just to cut our water off?  She said call the city.  So I called the city and they said someone would be here soon.  So I kept sweeping water out and then I had a thought, I need to collect water!  We may be out of water for a good while so I ran around with buckets at the faucets and collected water for washing dishes and flushing the toilet etc.  We have stored water but I still needed water.

So the nice man from the city came and cut all the water off to the house, it was the end of the day before the plumber came and it took a lot of work that evening to put the "stuff" under the carport other places for the night to let the fans dry the room. 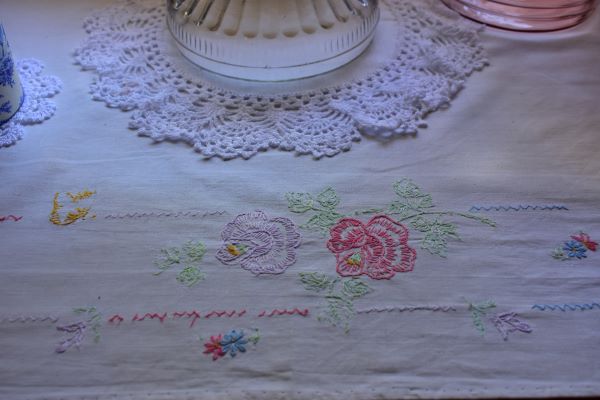 So our quiet Thanksgiving day of good food and dominoes and pajamas all day if we did not want to dress was here.

Early morning Charles went out to the freezer, he came back in with a look.  His face was red and he was having a little anxiety, very unlike himself.

He said, "I have some bad news", the freezer is dead!

He could not get his thoughts together because we had just topped off food for the holidays and because of the covid virus in case we had a shut down.

We do not normally use the freezer much because as we are trying to live more like the past we have been ridding ourselves of many modern things they did not have in the past. We have a plan to live simple and frugal and put more in savings.

We got rid of our large refrigerator and got a very small fridge. We got rid of the microwave and when the dishwasher started having problems we got rid of that. We even took out the toaster oven. But we kept the freezer because it was a small chest freezer and some food preserves better blanched and frozen.

Charles was not doing well with this and I put my hands on his shoulders and said, "We need a plan".  He looked at me and stared at me for a minute or so and said, "Ok".  So I said, we can do this, we can dehydrate and can everything!  We have the tools to do this!  We can do this! 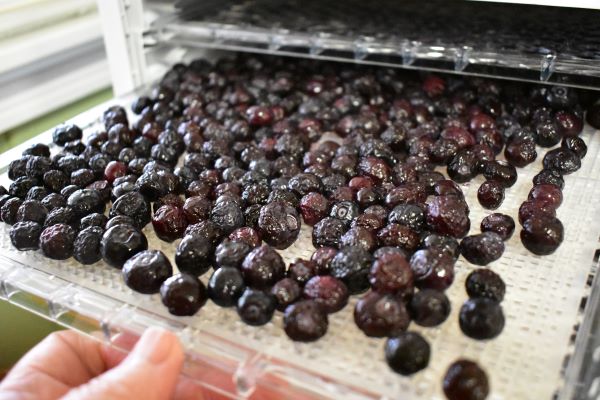 Charles had discovered the freezer had stopped before the food had thawed. We started with the vegetables and fruits 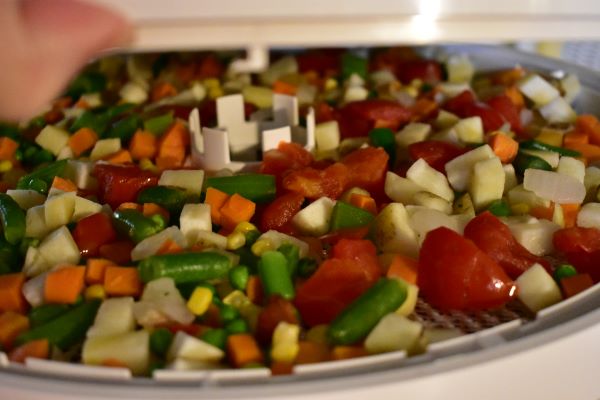 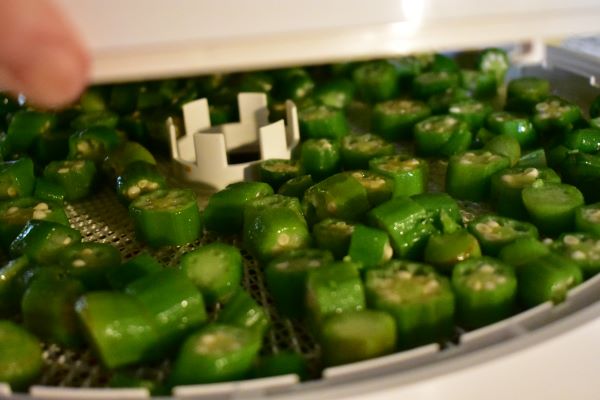 Okra, see the best part of this is frozen vegetables have already been blanched so I rinsed it and put it on the trays.. 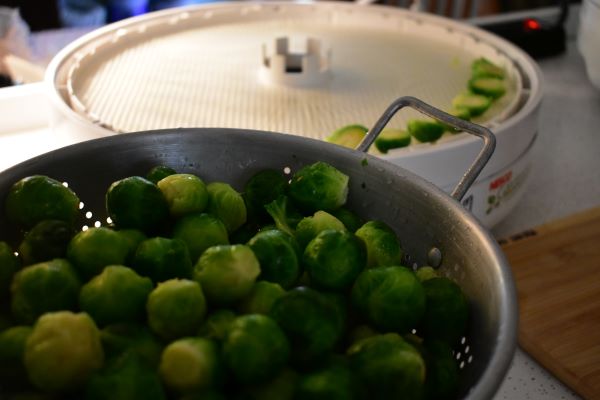 The book says to cut brussels sprouts in half before dehydrating so this was done. 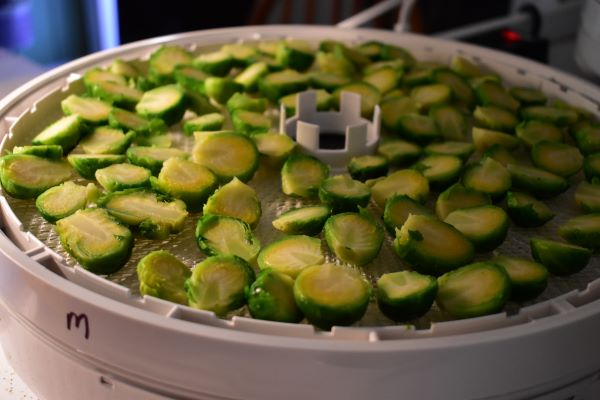 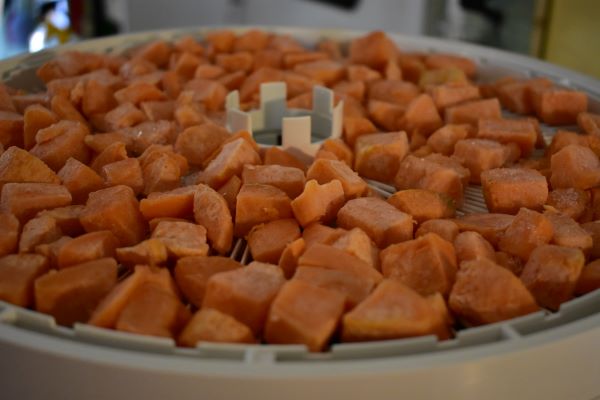 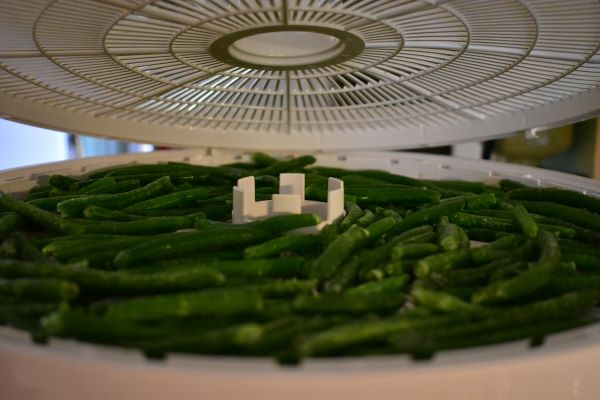 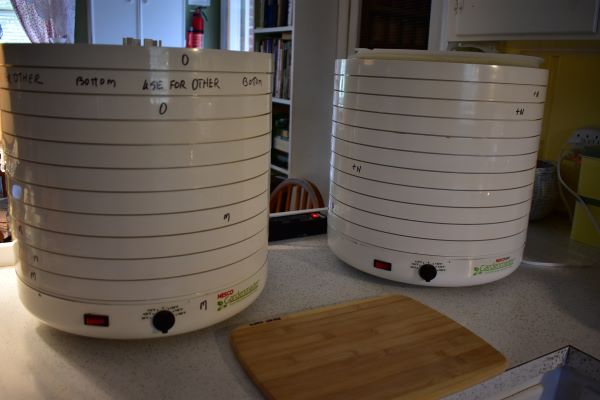 I use the dehydrators a lot before this happened and Charles and I talked that day and we decided we will not replace the freezer.  We have a tiny freezer in the small fridge and it will have to do.  This pushed us into doing what we already wanted to do and Charles hauled the freezer to our curb and a man came by and asked if he could take it, that he works on appliances and we said yes, to please take it away. 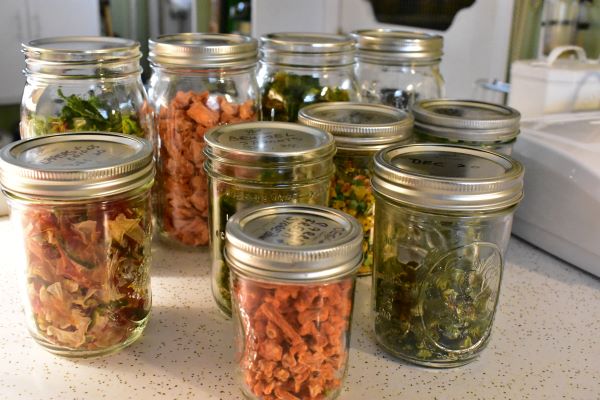 The next day as the food was finishing up I started air sealing the fruits and vegetables in jars. 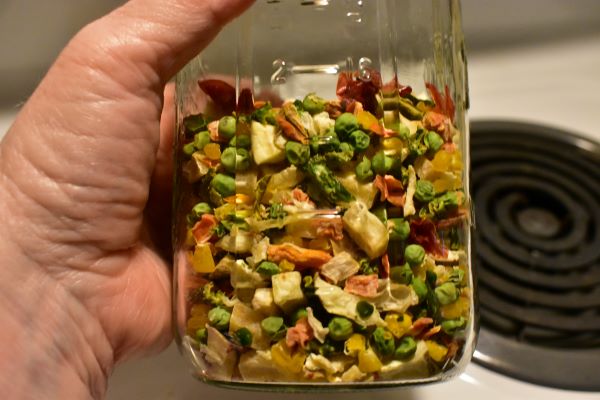 All the moisture is taken out and the flavor is left in dehydrated food. 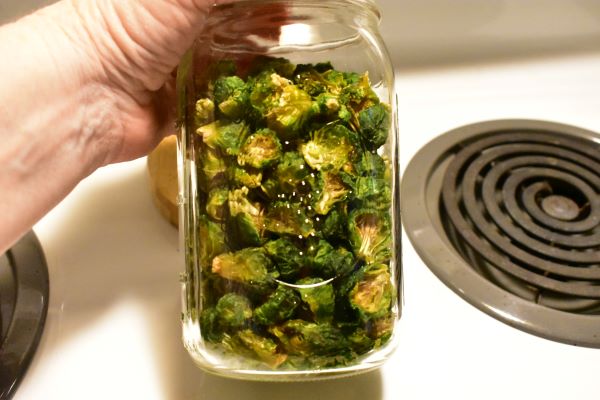 Broccoli and brussels sprouts do well dehydrated.  Dehydration is one of the oldest food preservation methods., fermentation is another. 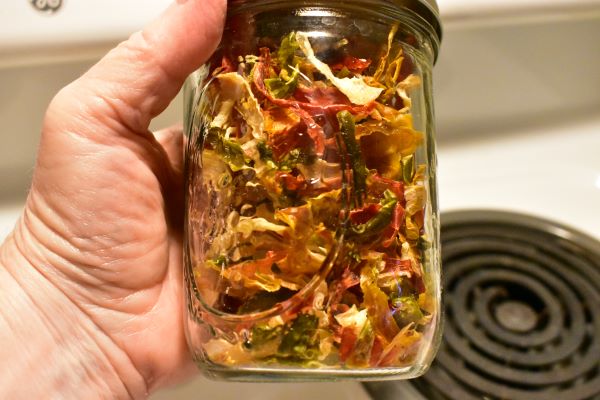 This is peppers and onions.  When the water is added back in to rehydrate this food it will look like it did before dehydration.  It is all about learning how to do things. 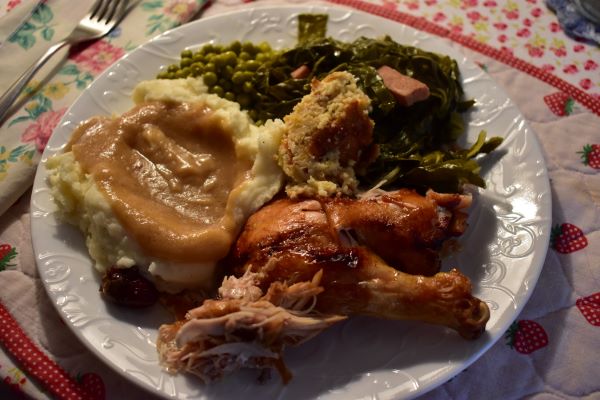 On Thanksgiving, we did not play dominoes but we had a wonderful traditional meal.  Charles baked the hen on the big green egg outside since I was dehydrating inside.  We both worked together and got it done.  It was an exciting day!  And we were so tired that we slept sound all night.

This could have been a more stressful situation if we would have let it be but it does not do any good to let ourselves become over stressed. It was actually a good lesson for us. Just do what we can about what we can and get on with it.

Above is Windsor, our 1920's icebox. Some of you may remember Windsor  We took it out of the house due to space after we discovered that in this modern time we live, we cannot purchase block ice as once done years ago.  We tried many things such as freezing old liter bottles and crushed ice and all kinds of ways but it took having to have a freezer and using all that space to do this and we gave up.  Then we moved Windsor to the old laundry room to store canning jars.

We have put Windsor back in the house and Windsor will once again hold food but it will be dehydraterd food.

Like this. I have not put the food in there yet, just put this in to show you how it will be used.  There is a lot of history with Windsor and sure wish Windsor could tell us where all he has been.

This did me some good because it made me think how I had been reacting to stress this year.  If we react too long it can go into depression.

Moving Windsor here in this location made another piece move, my mothers metal rolling cabinet.  To put that little cabinet where it needed to be I had to move what was there and so the shifting began again.

This will lead into another post because that also taught me a few important things.

Fill it With Love