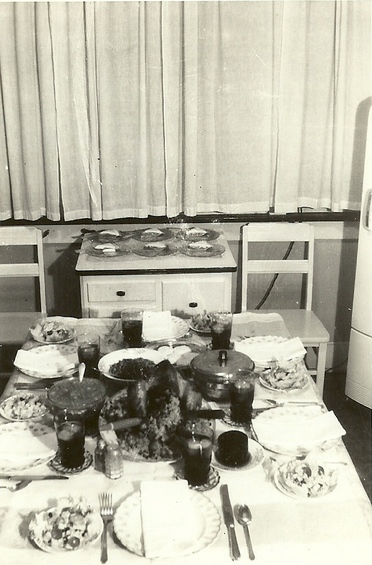 Many things have changed since the 1950's and oh how I wish that I could just zoom back to that era because so many things just made more sense.

Some people wonder what people ate in 1950 so I am doing a post on my memories of that time.

If you look back at the cookbooks from the 1950's to the 1980's you might think that these books show what most people ate during that time. But in reality it was very different because many families continued to cook what their families had eaten for generations and many recipe books were full of new ideas. 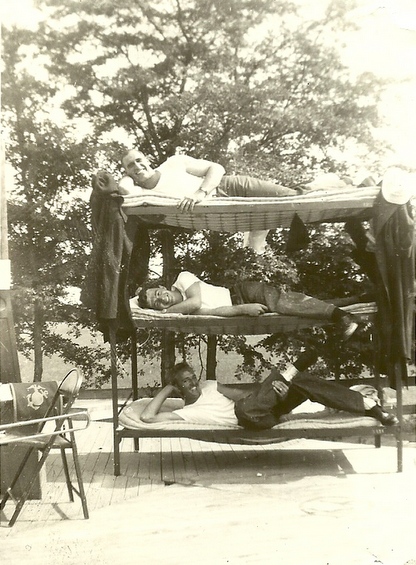 After world war II, food was changing. During the war food shortages and rationing brought in newly created processed foods. Some cookbooks with new food ingredients such as margarine/oleo, shortening, boxed cereals and cake mixes. Foods that could save you time in the kitchen. Television was new to America and as households were starting to get their first televisions advertising had a brand new way of getting you to buy what they wanted to sell. There were government films showing you how to eat and what to eat. When you look back now things become more clear than they were back then and we can see how we were steered to purchase what they wanted us to and convinced that this was the better way.

What did we eat?

1950's many families sat down to the table of simple home cooked meals of meat, vegetables, homemade desserts and fruits in season.

Meal time would look different depending where you lived and I can only discuss the things that I know about from where I lived. If you lived in a big city there were more modern goods and fast food was beginning to make changes, especially in the late 1950's and 1960's.

If you lived in small towns and rural areas most people were eating basic non processed foods.

Most families where I lived did not fill up their cupboards with junk foods because there was usually a homemade cake or pie around. At my Grandparents house you would find cold biscuits and butter for a snack.

Some people did eat boxed cereal and milk at breakfast but not normally for rural areas. My father enjoyed shredded wheat and milk.

Lunch would all depend if you were at home or at work. If you worked in a factory or office it would be a metal lunch box or bagged sandwich and possibly a slice of something sweet from home. Lunch could be a leftover biscuit with a piece of meat and If you were rural sitting at your home table it was probably meat, vegetables and most likely iced tea if you had electricity. 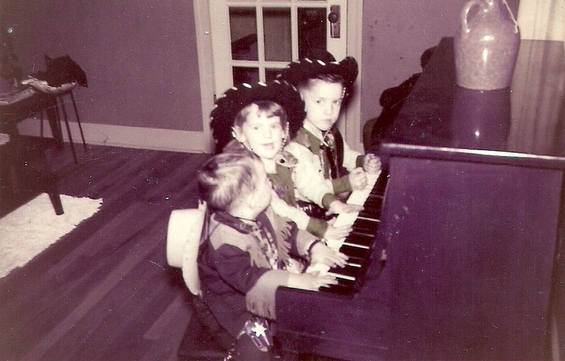 Supper time and or lunch time might be Fried Chicken or ham, meatloaf, fried fish or pork chops. Vegetables such as peas, mashed potatoes, sweet potatoes, corn, butter beans, turnip greens, mustard greens or most any vegetable that was in season. Salt pork was fried or used as seasoning in greens.

My family cooked potato pancakes often as a side dish with a dinner or lunch meal. A friend of mine had salmon cakes often. But either way meal time was normally meat and a couple of vegetables. Canned goods were also used when fresh vegetables were not in season.

This is a photo of Pate Chinois a family favorite.

This dish came from our generations from the Northern US and Canada. They ate meat pies and layered meat and vegetable dishes and we brought these traditions to the south and continue these same dishes even today . Another favorite of my family is an egg dish with a cream sauce. We eat a combination of Northern US and Southern US so I am not sure where the cream sauce originated from in my family. All I know is we ate, meat, vegetables, milk, butter, cream, fruit in season.

Casseroles became popular as time went by and especially popular into the 1970's and 1980's.

If I were to cook a 1950's supper tonight for my husband and myself I would most likely cook Meatloaf, mashed potatoes and gravy and peas or butter beans.

Pork Chops, pork roast or ham would have been a meat served with vegetables in season, potatoes or potato salad and possibly cabbage.

If Turnip or mustard Greens were in season most meals would include greens.

If Sweet Potatoes were in season then sweet potatoes would be eaten often.

Stew was very popular, it would be most likely beef, potatoes and carrots.

People ate what was in season and during the winter it would be foods from cold storage smoked or dried or something that was home canned or store bought canned. More organ parts were eaten then such as liver and hog jowl even brains. 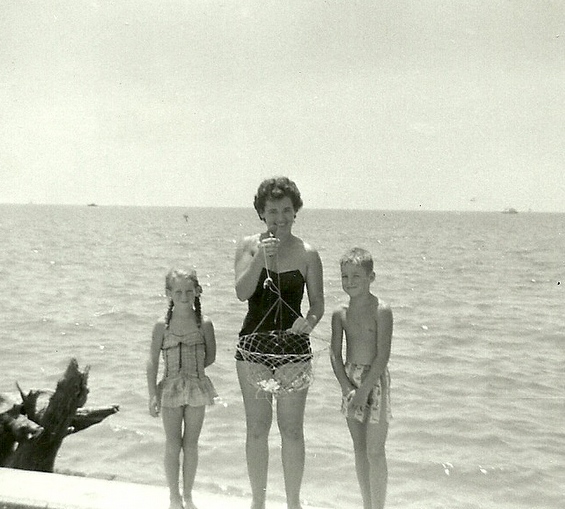 This photo was taken in the 1950s. When we went fishing or crabbing we ate what we caught.  It was never for sport. 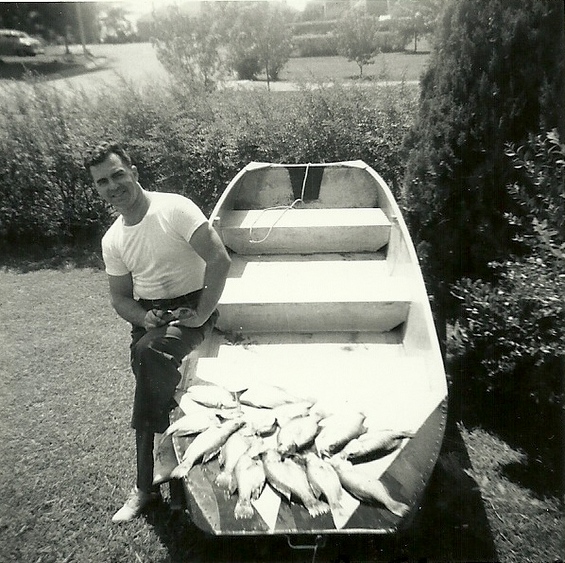 Our family ate a lot of fish and that brings up a good point.

What is most often left out is that during this time many people still hunted and killed game for their food. When I was young we lived in a fairly large city but my father would still go hunting and fishing. We ate most anything from squirrel, rabbit, quail, fish, dove, deer, turkey or most any game. It all depended on where you lived and it was very common to eat these foods.

When hamburgers became popular and my mother-in-law cooked hamburgers she would put them on white bread and have vegetables and mashed potatoes on the table to eat with the hamburger.

Most people had smaller waists than they do today and were slim to moderate size. I think that the problem with weight today is a combination of too many changes in the way food is grown, the artificial things they put in foods to the chemicals in our goods that affect our bodies. I really have no clue this is just my speculation. The reason I feel this is in the 1950's we ate good meals and we frequently ate desserts. It was common to eat a dessert at night with milk and people did not seem to get heavy from eating these foods.

Pound cake is a favorite southern cake and it is full of butter, sugar and flour but we did not get fat eating pound cake. Today I often hear people say people need to eat in moderation. We did eat in moderation and we did not have large sodas as we do today. The bottles were smaller and probably our servings were a bit smaller on our plate but we also walked more, worked hard and did not sit around watching television and use electronics all day long either. 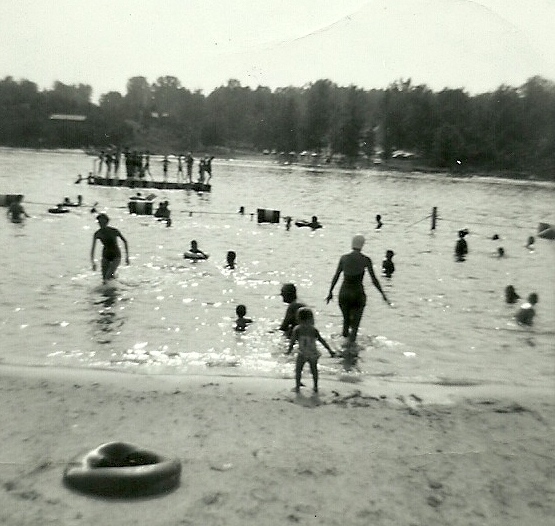 We were more active in the 1950's than we are today. It was common to picnic and swim in the summer.
In the city we had to walk a fair distance to a bus stop. Then from the bus stop to were we were going and back again on the way home. In the rural area there was a lot of work and a lot more walking.

As time went by more and more boxed desserts and boxed meals were served. Food became artificial but now I feel we are slowly finding our way back to our roots because people know something is wrong.

I hope this article helps to put some light on some confusion about what people ate earlier in time. Please do not copy or use these photos for any reason, they are very precious to me.  Grandma Donna