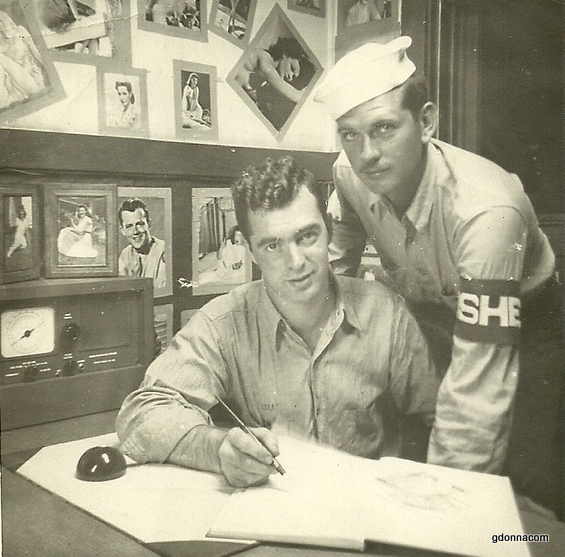 My husband and I have been trying to live more like the past for quite some time but what we are doing now is a bit different.

I received a email from a website visitor, her name is Catherine. At first we were catching up a bit and she was discussing how she was doing more things from the past. Then Catherine mentioned, “ I have been considering trying to live on WWII rations (food, gas, etc.) for awhile as a good experience.” She discussed how it would have made you thoughtful about using your car, not wasting food or anything else for that matter.

My next email to her was, “Catherine, I love your idea about the WWII rationing.” Then after talking with my history buff husband, 166 emails back and forth with Catherine (at this time I am writing this), umpteen trips to the public library for hours and hours of research, removal of many items from our house, practice and sore muscles, We are In! It is 1943 at our house! 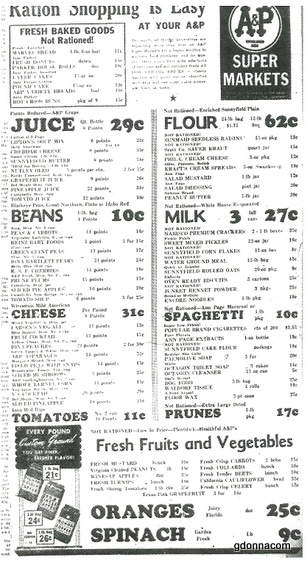 I made a book from the copies I made at the library of newspaper articles and grocery ads and even what was on at the movie theater. 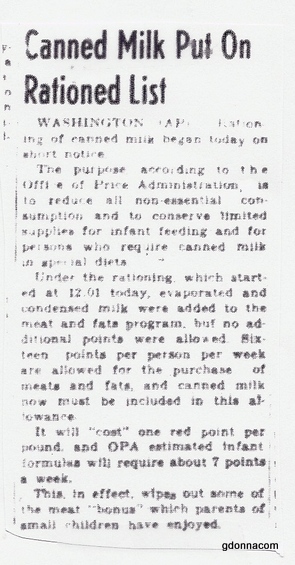 We have already started but we had so much to learn and get use to so much change that we decided to not count our time that we have been doing this. Our official start date is July First and will last for one full year. I will be posting updates on what we are doing, explaining the ration points and other happenings. 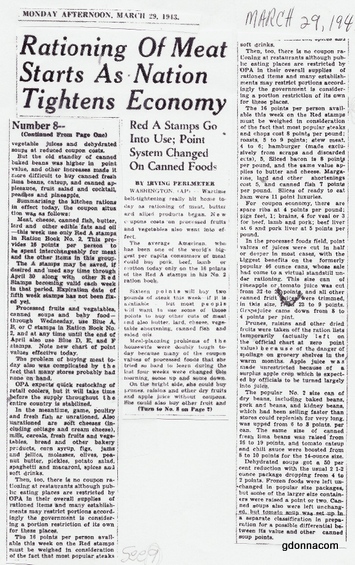 As time allows, I will type out what these articles said because I realize you probably cannot read this. 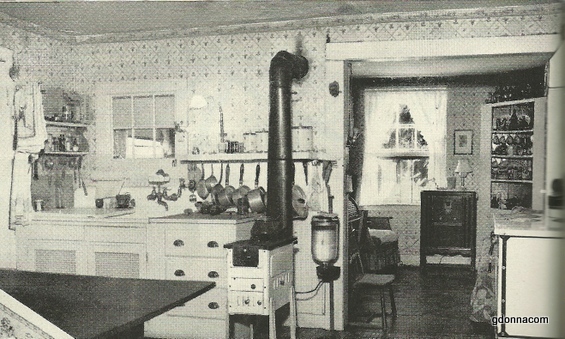 In our area houses were quite different. I figure that in 1943 most would not be living in a new house. The Great Depression in the thirties and then the war. Modern would have been a house with a hot water heater, a stove and a washing machine with a wringer. Many rural families still did not have electricity. 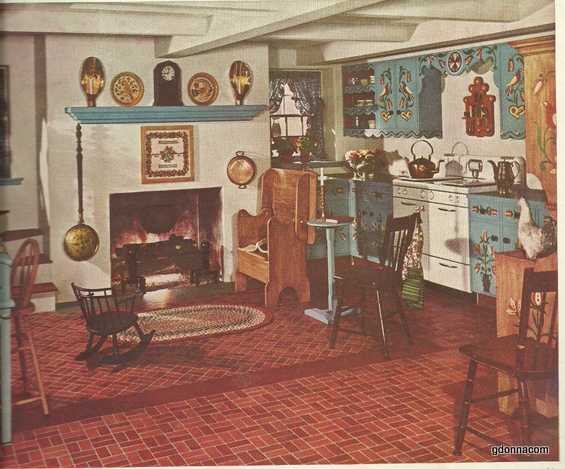 This was from a scrapbook clipping and this was a new look for houses in that time. Notice it has a stove.

Catherine and her husband are doing this too and started before us. Since we live in different states far away from each other we are trying to stay true to our areas we live in. My husband and I live in the deep south and the rations were the same across the country but the way we live can be different. What we had in our homes and our circumstances can be different. Catherine is blogging too and here is her blog. http://elsiesgranddaughter.blogspot.com

Considering the differences, my husband and I made a profile based on how our families from the past would have lived. We made many phone calls to the oldest family members that would have any memory of WWII. We asked all kinds of questions and asked the same questions to each one we called.

One of our family members remembered posting ration stamps in books for her father, he worked for a gas/oil company. One gave us good information about what the houses had in them such as bathtubs, water heaters, stoves etc. What did they use for soap? In our area, bar soap, flaked soap mostly, no shampoo. Dish washing was done with flaked or bar soap in our area. Just because something was invented and on the market did not mean it was being used because it may not have been available everywhere.

One when asked did they have shampoo? Oh no, you cannot have that! How about a hair dryer? Oh no you cannot have that! I should know that since I did not have one until I was an adult. It was wash, roll and put a scarf on. Also sometimes sleep with curlers and that made for a very uncomfortable night. 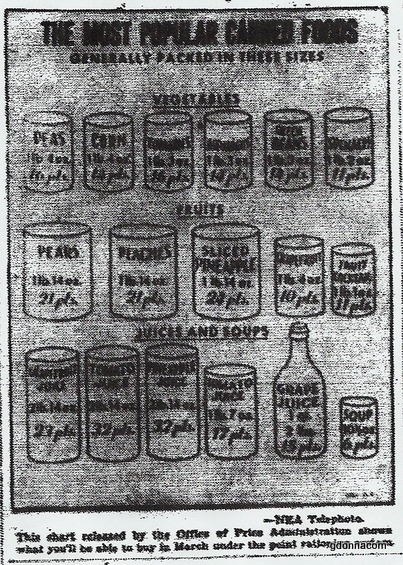 We were surprised how much research was needed for this project. Our generations before us did not have what we have now so they did not give up things as were are doing for this project. It is very difficult to give up what we have become use to and go back in time.
We did not go out and buy all old things even though we already have a lot of old things, we just have to use our imagination on some things because it would be unaffordable to set our house to that time.

Just in case you want to jump in and do this I will post the rations. You will have to research your area for 1943 what the houses looked like and what was available to your area. Or you can just ration food and gas etc during that time and not do all of this.

Our real house does not have all the things listed below, but we made a profile so we could simulate as much as we can to live like 1943. We have made some changes to adapt to living like 1943.

We live in south Alabama.

We live in a medium to small size town with three grocery stores.(this is what our real town had in 1943)

We have a small wood frame white house. (we have a small brick house)
We have one bathroom with a tub, no shower. (we removed our shower head)
We have a cranky old hot water heater that will blow up if you don't turn it off after you heat it up for bath water. (Family story told to us)
We have one car it is a 1939 Ford 2 door Sedan. (Imaginary)
My husband is a traveling salesman (real)
We have a round washing machine with a hand crank wringer. (we did make a change here, we purchased side by side small washer called a panda that requires washing in one side, removing and spinning on the other side, put in pail, start over for the rinsing. I will have to use this for awhile to let you know how this is working, I will put up a post on this washer later)
We have a outside clothesline (real)
We have a stove, refrigerator, cabinets and kitchen sink in the kitchen. (real)
We have a Philco radio with tubes in the back.(we do have this)
We purchase the newspaper but not every day (We do this)
We have two bicycles (we have these)
We use a percolator to make coffee (we are using a percolator)

We have a very small victory garden due to our limited space. (we have this)

We will not be 100% 1943.
We keep our cell phones because of my husbands real work and because of family.
We use the window air conditioner but only when needed because I would be sick from heat and not be able to do this project. I do not know if it is hotter now than it was in 1943 but would love to know if someone has a way to find these records.
We use our modern camera for posting. 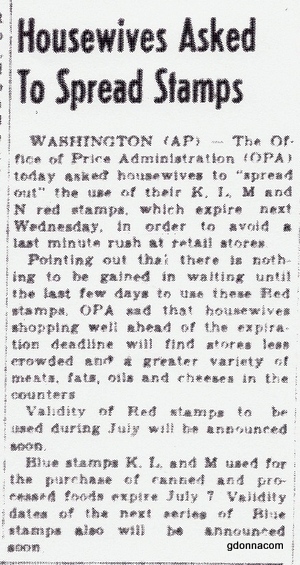 Sugar is rationed 8 ounces per week per person. There is a stamp for 5 pounds of sugar if you go before the board and request it for canning purpose. This has to be approved.

We receive 3 gallons of gasoline per week. If approved, there is more gasoline for people with certain jobs.

If you live in the United States, don't confuse the internet articles with the UK articles.  Their rations were different. Each country had different rations.

Many times shelves were bare and there was often shortages.

I will be back soon, Take Care, Don't waste, Grandma Donna